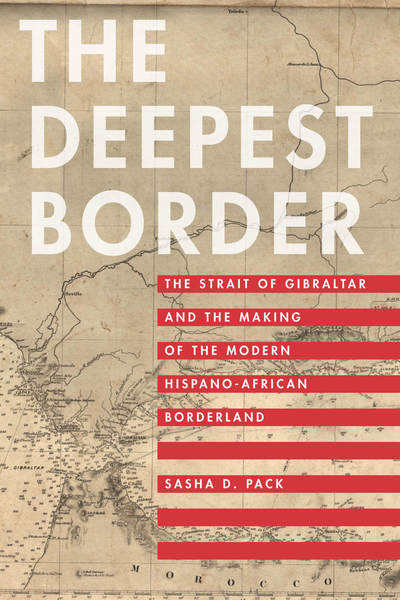 The Deepest Border
The Strait of Gibraltar and the Making of the Modern Hispano-African Borderland
Sasha D. Pack

In the mid-nineteenth century, as European navies learned to neutralize piracy, new patterns of circulation and settlement became possible in the western Mediterranean. The Deepest Border tells the story of how a borderland society formed around the Strait of Gibraltar, bringing historical perspective to one of the contemporary world's critical border zones.

Drawing on primary and secondary research from Spain, France, Gibraltar, and Morocco—including military intelligence files, public health reports, consular correspondence, and travel diaries—Sasha D. Pack draws out parallels and connections often invisible to national and mono-imperial histories. In conceptualizing the Strait of Gibraltar region as a borderland, Pack reconsiders a number of the region's major tensions and conflicts, including the Rif Rebellion, the Spanish Civil War, the European phase of World War II, the colonization and decolonization of Morocco, and the ongoing controversies over the exclaves of Gibraltar, Ceuta, and Melilla. Integrating these threads into a long history of the region, The Deepest Border speaks to broad questions about how sovereignty operates on the "periphery," how borders are constructed and maintained, and the enduring legacies of imperialism and colonialism.

Sasha D. Pack is Associate Professor of History at the University at Buffalo, SUNY. He is the author of Tourism and Dictatorship: Europe's Peaceful Invasion of Franco's Spain (2006), which was awarded the Best First Book Prize by the Association for Spanish and Portuguese Historical Studies.

"Sasha D. Pack's highly original study of this critical Mediterranean chokepoint represents a masterpiece in the field of border studies. We encounter smugglers and seamen, rebels and rulers, settlers and soldiers, and a host of others who forged a modern borderland that collapsed in the post-colonial era. Integrating local and regional scales of analyses with grand imperial and global narratives of modernity, The Deepest Border advances novel theoretical arguments."

—Julia Clancy-Smith, author of Mediterraneans: North Africa and Europe in an Age of Migration

"Sasha D. Pack's study of the century-long making and unmaking of a 'trans-Gibraltar' border zone traces both the high international politics and the local low dealing of this fascinating and complex corner of the Mediterranean. Clearly written, widely researched, detailed and engaging, his account of a century and more of 'borderland politics' astride the Strait allows readers to see Moroccan and Spanish history, and broader inter-imperial competition, from new perspectives."

"This engagingly written book examines the exchanges and interactions in the Mediterranean's western reaches over the last two centuries by focusing on the Strait of Gibraltar and some of the region's important enclaves..This is a solid addition to the growing literature of borderlands studies. Highly recommended."

"The Deepest Border is an outstanding contribution to scholarship on modern Spanish and Mediterranean history. Superbly researched in archives in Spain, Gibraltar, France, England, and the United States, Pack's study speaks to those with an interest in Mediterranean history, but will also be of interest to scholars of borderlands dynamics in other settings and to readers interested in territoriality and state formation."