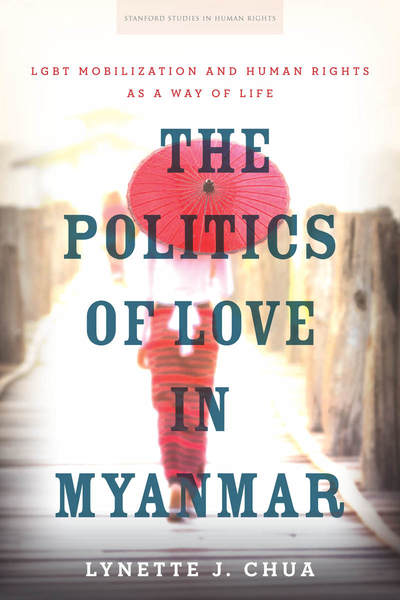 The Politics of Love in Myanmar
LGBT Mobilization and Human Rights as a Way of Life
Lynette J. Chua
SERIES: Stanford Studies in Human Rights

The Politics of Love in Myanmar offers an intimate ethnographic account of a group of LGBT activists before, during, and after Myanmar's post-2011 political transition. Lynette J. Chua explores how these activists devoted themselves to, and fell in love with, the practice of human rights and how they were able to empower queer Burmese to accept themselves, gain social belonging, and reform discriminatory legislation and law enforcement. Informed by interviews with activists from all walks of life—city dwellers, villagers, political dissidents, children of military families, wage laborers, shopkeepers, beauticians, spirit mediums, lawyers, students—Chua details the vivid particulars of the LGBT activist experience founding a movement first among exiles and migrants and then in Myanmar's cities, towns, and countryside. A distinct political and emotional culture of activism took shape, fusing shared emotions and cultural bearings with legal and political ideas about human rights. For this network of activists, human rights moved hearts and minds and crafted a transformative web of friendship, fellowship, and affection among queer Burmese. Chua's investigation provides crucial insights into the intersection of emotions and interpersonal relationships with law, rights, and social movements.

Lynette J. Chua is Associate Professor of Law at the National University of Singapore. Her first book, Mobilizing Gay Singapore: Rights & Resistance in an Authoritarian State (2014), received the Distinguished Book Award from the American Sociology Association's Sociology of Law Section.

"The Politics of Love in Myanmar is highly original, compelling, and powerful. Lynette Chua's ethnography excavates the emotional bonds and 'way of life' that developed through human rights practice by LGBT activists in post-2011 Myanmar. Beautifully written and brilliantly theorized, the book is highly recommended reading for scholars interested in human rights, legal mobilization, social movements, and LGBT politics."

"Lynette Chua deftly opens a new window on the empirical investigation of emotions, demonstrating the surprising ways that emotions animate not just relationships and social movements, but the interpretation, assertion, and lived meaning of rights. The lessons drawn from the vivid, human lives of Tun Tun, Tin Hla, and their fellow activists are a revelation."

"In addition to being a pioneering and timely study of LGBT mobilization in Myanmar, Chua's book is a valuable contribution to the study of human rights and sociolegal scholarship on rights and social movements."