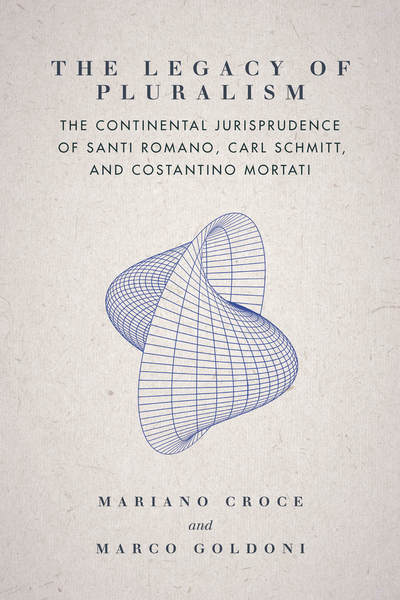 How should the state face the challenge of radical pluralism? How can constitutional orders be changed when they prove unable to regulate society? Santi Romano, Carl Schmitt, and Costantino Mortati, the leading figures of Continental legal institutionalism, provided three responses that deserve our full attention today. Mariano Croce and Marco Goldoni introduce and analyze these three towering figures for a modern audience. Romano thought pluralism to be an inherent feature of legality and envisaged a far-reaching reform of the state for it to be a platform of negotiation between autonomous normative regimes. Schmitt believed pluralism to be a dangerous deviation that should be curbed through the juridical exclusion of alternative institutional formations. Mortati held an idea of the constitution as the outcome of a basic agreement among hegemonic forces that should shape a shared form of life.

The Legacy of Pluralism explores the convergences and divergences of these towering jurists to take stock of their ground-breaking analyses of the origin of the legal order and to show how they can help us cope with the current crisis of national constitutional systems.

Mariano Croce is Associate Professor of Political Philosophy at the Department of Philosophy of Sapienza Università di Roma.

Marco Goldoni is Senior Lecturer in Legal Theory at the Law School of the University of Glasgow.

"A long overdue contribution to the study of twentieth century state and constitutional theory, The Legacy of Pluralism brings the important works of Santi Romano and Costantino Mortati into conversation with Carl Schmitt's better known jurisprudence. An indispensable book for legal and political theorists seeking to reconceptualize law beyond the decisive/norm divide in subnational and transnational contexts."

"At a time when constitutional and legal theory reflect the crisis of liberal democracy, this highly illuminating book reflects on the attempts by Santi Romano and Mortati to provide theories of public law that take account of the material basis of constitutions, the forces that lead to pluralism, and the place of politics in the legal order."

"This fascinating analysis of the work of three eminent jurists of the early twentieth century offers a unique perspective on the relation between law and politics. An instructive and compelling read on the challenges of pluralism to the unity of the state."

—Lea Ypi, The London School of Economics and Political Science

"[I]f we are witnessing the luxuriance of drives and debates that stress complexity rather than uniformity, claims for processes of autonomy and recognition of what is particular in the social fabric as opposed to a pretentious monolithism, the cause of this lies precisely in the crisis of a political paradigm that finds its fulcrum and raison d'être in sovereignty. This is exactly where Croce and Goldoni's text fits in, and it does so by proposing in backlight two uncomfortable but necessary questions. The first one: what are we talking about when we talk about 'pluralism'? And the second, consequently: how is it possible to rethink a unity in a structurally plural way?"