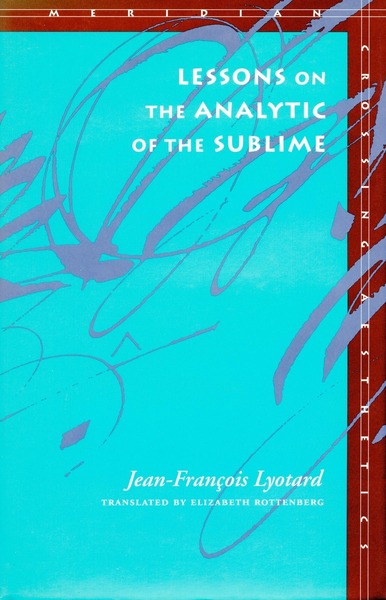 Philosophical aesthetics has seen an amazing revival over the past decade, as a radical questioning of the very grounds of Western epistemology has revealed that some antinomies of aesthetic experience—and in particular of the limits of the aesthetical—can be viewed as a general, yet necessarily open model for human understanding. In this revival, no text in the classical corpus of Western philosophy has been more frequently discussed than the complex paragraphs modestly inserted into Kant's Critique of Judgment as sections 23-29: the Analytic of the Sublime.

This book is a rigorous explication de texte, a close reading of these sections. First, Lyotard reconstitutes, following the letter of Kant's analysis, the philosophical context of his critical writings and of the European Enlightenment. Second, because the analytic of the sublime reveals the inability of aesthetic experience to bridge the separate realms of theoretical and practical reason, Lyotard can connect his reconstitution of Kant's critical project with today's debates about the very conditions—and limits—of presentation in general.

Lyotard enables us to see the sublime as a model for reflexive thinking generally via his concept of the "differend," which emphasizes the inevitability of conflicts and incompatibilities between different notions and "phrases." The Analytic of the Sublime, he points out, tries to argue that human thought is always constituted through a similar incompatibility between different intellectual and affective faculties. These lessons thus highlight the analysis of a "differend of feeling" in Kant's text, which is also the analysis of a "feeling of differend," and connect this feeling with the transport that leads all thought (critical thought included) to its limits.