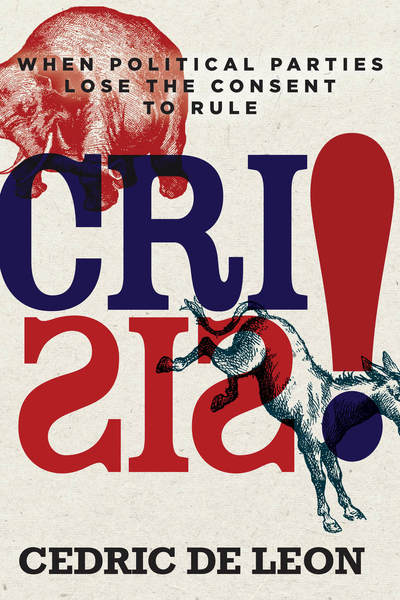 A timely analysis of the power and limits of political parties—and the lessons of the Civil War and the New Deal in the Age of Trump.

American voters have long been familiar with the phenomenon of the presidential frontrunner. In 2008, it was Hillary Clinton. In 1844, it was Martin Van Buren. And in neither election did the prominent Democrat win the party's nomination. Insurgent candidates went on to win the nomination and the presidency, plunging the two-party system into disarray over the years that followed.

In this book, Cedric de Leon analyzes two pivotal crises in the American two-party system: the first resulting in the demise of the Whig party and secession of eleven southern states in 1861, and the present crisis splintering the Democratic and Republican parties and leading to the election of Donald Trump. Recasting these stories through the actions of political parties, de Leon draws unsettling parallels in the political maneuvering that ultimately causes once-dominant political parties to lose the people's consent to rule.

Crisis! takes us beyond the common explanations of social determinants to illuminate how political parties actively shape national stability and breakdown. The secession crisis and the election of Donald Trump suggest that politicians and voters abandon the political establishment not only because people are suffering, but also because the party system itself is unable to absorb an existential challenge to its power. Just as the U.S. Civil War meant the difference between the survival of a slaveholding republic and the birth of liberal democracy, what political elites and civil society organizations do today can mean the difference between fascism and democracy.

Cedric de Leon is Director of the Labor Center and Associate Professor of Sociology at the University of Massachusetts Amherst. He is the author of The Origins of Right to Work (2015) and Party and Society (2014) and co-editor of Building Blocs: How Parties Organize Society (Stanford, 2015). Prior to becoming an academic, he was by turns an organizer and local union president in the American labor movement.

"Crisis! draws important parallels between the Civil War and our present moment: that the planter class of the 19th century initially resisted secession finds echoes today in actions of the superrich, many of whom once opposed Trump but have now come on board, setting in motion consequences that threaten their wealth and power. A fascinating book."

"Cedric de Leon offers a compelling narrative that sheds light on our present political moment and serves as a resource to anyone wishing to understand and end the crisis of confidence that has gripped American politics."

"Cedric de Leon makes a bold and convincing argument about the sources of political crises and popular disaffection with the major political parties: it is the dynamics of the parties themselves, rather than voters' economic self-interest or cultural goals, that create moments of political breakdown."

—Ann Shola Orloff, coeditor of The Many Hands of the State: Theorizing Political Authority and Social Control

"Cedric de Leon sees a crisis in contemporary American politics similar to the one leading up to the Civil War. His paths forward—led either by political party leaders or through a surge of political independence among voters—point toward very different futures for U.S. democracy. As argued in Crisis!, we are living in extraordinary political times."

"[De Leon offers] a sober analysis that centers its story on the relationships between a party and its base. If we are to find a way out of this 'time of monsters,' one way would be through movements that recognize these 'crisis points' and use them to break out of a system of political hegemony that has largely ignored climate change, allowed the growth of unsustainable levels of inequality and is actively disenfranchising people across the globe. The challenges for such movements are enormous, but the time has never been more ripe."

"In the end Crisis! is an important contribution to the new historical sociology of parties from one of the leading scholars in the field. It is a welcome correction to scholarly and public debates that elide the centrality of parties in the making of American political history and our current predicament... What Crisis! offers is a concise cross-case analysis of key periods of political dissolution with an eye to enhancing our understanding of the present, laying important groundwork on which the rest of us can (and should) build."