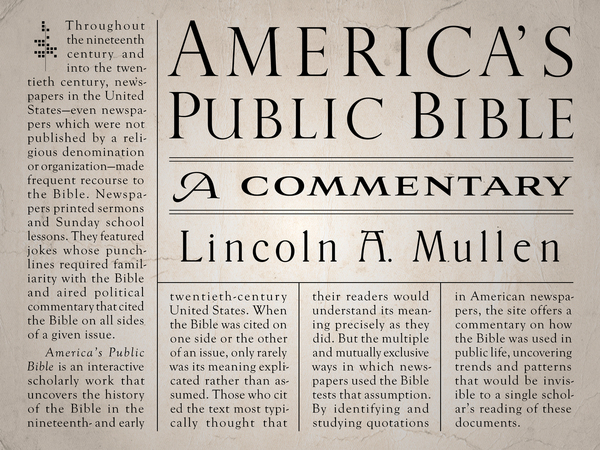 Throughout the nineteenth century and into the twentieth century, newspapers in the United States—even newspapers which were not published by a religious denomination or organization—made frequent recourse to the Bible. Newspapers printed sermons and Sunday school lessons. They featured jokes whose punchlines required familiarity with the Bible and aired political commentary that cited the Bible on all sides of a given issue.

America's Public Bible is an interactive scholarly work that uncovers the history of the Bible in the nineteenth- and early twentieth-century United States. When the Bible was cited on one side or the other of an issue, only rarely was its meaning explicated rather than assumed. Those who cited the text most typically thought that their readers would understand its meaning precisely as they did. But the multiple and mutually exclusive ways in which newspapers used the Bible test that assumption. By identifying and studying quotations in American newspapers, the site offers a commentary on how the Bible was used in public life, uncovering trends and patterns that would be invisible to a single scholar's reading of these documents.

Lincoln A. Mullen is Associate Professor in the Department of History and Art History at George Mason University. He serves as one of the faculty directors at the Roy Rosenzweig Center for History and New Media.

"The most ambitious quantitative analysis of its kind and a new window into the use of the Bible in American public life. Lincoln Mullen's digital wizardry is matched only by his incisive historical commentary on the data he has amassed. He has set a new standard for digital historical scholarship."

"Laying bare how the Bible was used in the American press, America's Public Bible is a one-of-a-kind contribution to historical knowledge and digital scholarship. Its rich analysis and sophisticated tools deliver insights into nineteenth-century American history made decidedly in the twenty-first."