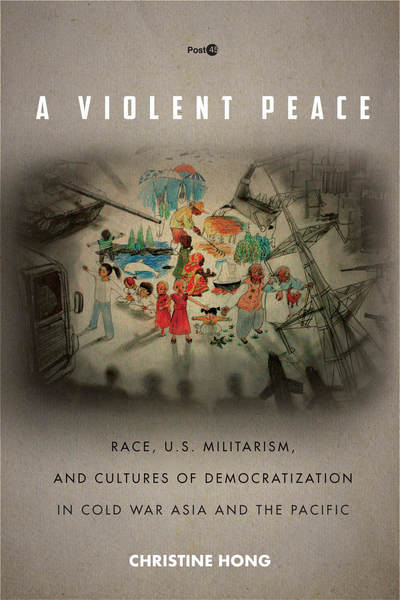 Winner of the 2022 Award for Best Book in Humanities & Cultural Studies: Literary Studies, sponsored by the Association for Asian American Studies (AAAS).

A Violent Peace offers a radical account of the United States' transformation into a total-war state. As the Cold War turned hot in the Pacific, antifascist critique disclosed a continuity between U.S. police actions in Asia and a rising police state at home. Writers including James Baldwin, Ralph Ellison, and W.E.B. Du Bois discerned in domestic strategies to quell racial protests the same counterintelligence logic structuring America's devastating wars in Asia.

Christine Hong is Associate Professor of Literature and Critical Race and Ethnic Studies at the University of California, Santa Cruz. Her political commentary has appeared in The Nation and on Democracy Now! and Al Jazeera.

"A Violent Peace is a tour de force, a brilliant rebuttal to the myth of America as defender of human rights abroad and racial justice at home. Christine Hong demonstrates how radical black and Asian intellectuals' penetrating critiques represent the real democratizing project. Beautifully written and persuasively argued, this book is a seismic shift in Cold War cultural history and our geopolitical imagination."

"Bursting with brilliance, clarity, and insight, this stunningly original and expansive work excavates the cross-racial, transnational origins of today's militarized modernity. Christine Hong unearths the hidden linkages between race, capital, and occupation in making our postwar global order and points us to alternative conceptions of community and solidarity that defy the borders of modern sovereignty. This book is a game-changer."

"Though grounded in Asian American studies, A Violent Peace makes powerful contributions to several other fields such as Cold War studies, African American literature and politics, discourses of militarization and securitization, global theories of race as well as literary and cultural studies broadly."

"Hong's work is honest, necessary, and generative in its political vision.A Violent Peaceoffers a crucial set of arguments that will help us to navigate the ruins of the world that US hegemony built and work toward collectively creating a new one." A. J. Yumi Lee, Contemporary Literature

"A Violent Peaceprovides a crucial connection between US foreign wars in East Asia and harsh domestic suppression working in tandem to gain total control."

"Hong's work as a whole is an important contribution to the history of post-war US that recenters racialized humanity to illustrate the military-imperial violence that minimized the structures in which race was targeted, captured, and mobilized."

"Viewing the culture of democratization in the post-1945 world order through the lens of US militarism, Christine Hong'sA Violent Peaceoffers the opportunity to survey some of the intellectual currents behind the revival of scholarly interest in the Korean War among literary and cultural critics."

"With great eloquence, [Hong] draws insightful connections between race, class, and power, while vividly demonstrating how the expansion of U.S. power into the Asia-Pacific in the postwar era has led to the world we live in today. Deeply considered and thought-provoking,A Violent Peaceis essential to understanding our current predicament.—Gregory Erlich, CounterPunch

"Christine Hong's... shattering, academic analysis,A Violent Peace: Race, U.S. Militarism, and Cultures of Democratization in Cold War Asia and the Pacific, provides a people's perspective on the traumas wrought by the U.S. geosecurity structure that has lorded over the region since World War II."

"In encouraging scholars to consider the co-constitution of postwar racial liberalism and Cold War imperialism, [A Violent Peace marks] a timely intervention in an urgent political context."