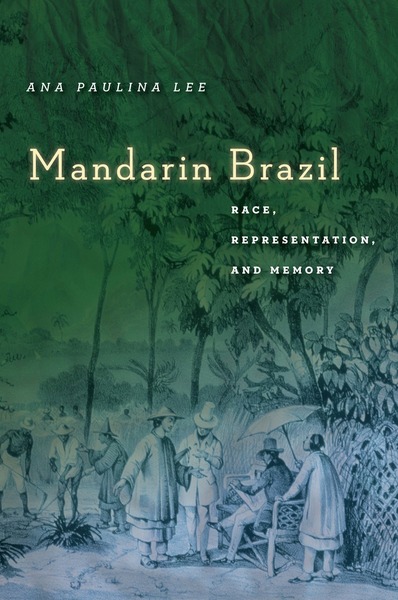 Winner of the 2019 Antonio Candido Prize – Best Book in the Humanities, sponsored by the LASA Brazil Section.

In Mandarin Brazil, Ana Paulina Lee explores the centrality of Chinese exclusion to the Brazilian nation-building project, tracing the role of cultural representation in producing racialized national categories. Lee considers depictions of Chineseness in Brazilian popular music, literature, and visual culture, as well as archival documents and Brazilian and Qing dynasty diplomatic correspondence about opening trade and immigration routes between Brazil and China. In so doing, she reveals how Asian racialization helped to shape Brazil's image as a racial democracy.

"Mandarin Brazil is an excellent example of the New Latin American Ethnic Studies that has developed over the last decade. Lee's book demonstrates that ideas about immigrants are critical to the formation of Brazilian national identity and that Chinese racialization cannot be separated from broader social, economic, and cultural relations that emerged from a heritage of slavery and an elite desire for 'whiteness.'"

"A richly textured and meticulously researched study of Chinese racialization in Brazil. Lee elegantly weaves together the 'minor' fragments of Chinese cultural representation to analyze the shifting meanings of Chinese personhood in Brazil against the broader context of global race-making that arose with European colonial expansion and that continued in nation-building projects. A must-read for anyone studying Brazil, Latin America, Chinese diaspora, and Asians in the Americas."

"I enthusiastically recommend Lee's book as a contribution to Brazilian, Asian, Latin American, Asian American, and Race and Ethnic Studies. Those interested in Performance Studies and Gender and Sexuality Studies would also benefit from reading Lee's work. Its careful interweaving of history, politics, and literature from Asia, Europe, and Latin America, which spans five centuries, is meticulously researched and richly conveyed to its readers."––Zelideth María Rivas, Transmodernity

"Lee's work is pathbreaking. Mandarin Brazil is required reading for interdisciplinary scholars of Asian migrations in the Americas as well as scholars of Brazilian and Latin American history, and its evocative source base will make the book an attractive option for undergraduate courses in Latin American history, Spanish and Portuguese, and ethnic studies."––Fredy González, H-Net

"Mandarin Brazilis an important contribution to the historiography of postcolonial Brazil that demonstrates the crucial role of representations of the Chinese in the construction of Brazil's national myth of racial democracy. More broadly, Paulina Lee's work is an important piece of the larger scholarship on the circumoceanic memory of exploitative labor and processes of cultural construction of the racial Other."––Thais R. S. de Sant' Ana, Canadian Journal of Latin American and Caribbean Studies

"Mandarin Brazil is a thought-provoking work of scholarship relevant to a variety of fields: Brazilian history and culture, Asian American studies, migration history, the history of Portuguese imperialism, post-colonial studies, Lusophone literatures, and others....For historians, this work also sheds light on the stimulating possibilities of often-overlooked primary sources, such as songs, in transnational and global history studies."

"Mandarin Brazil is an edifying work...Bridging the historical and culture gap between Brazil and Asia, the book weaves together a mélange of complex racial and ethnic identities that were instrumental to the development of modern Brazil....[A] great addition to the growing historiography of the Asian-Latino Studies."

"The interpretative force of Ana Paulina Lee's study of aspects of Chineseness and circumoceanic memory, with a spatial focus on Brazil, is a solid and relevant incentive for exponential growth of research that can strengthen Brazil-China relations. Although there are no consistent historical ties that bring the two countries together, and both are still largely unknown to each other, there are still traces (reconstructed, resignified, and reinvented in time) of old representations and old circumoceanic memories that need to be reckoned with."

"Mandarin Brazil makes major contributions to understanding the politics of Asians and Asianness in the Americas."