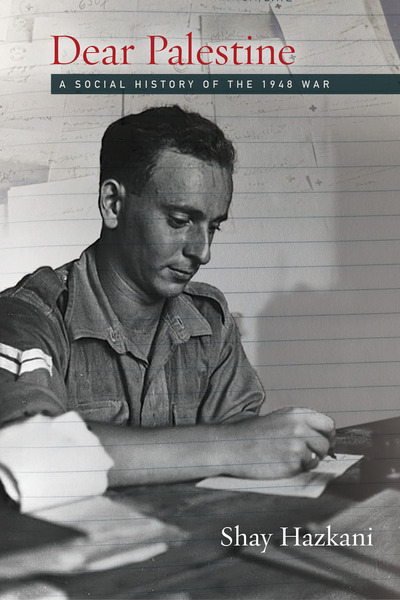 Longlisted in the 2021 Cundill History Prize, sponsored by McGill University and the Cundill Foundation.

Winner of the 2022 Korenblat Book Award in Israel Studies, sponsored by the Cherrick Center for the study of Zionism, the Yishuv, and the State of Israel.

In 1948, a war broke out that would result in Israeli independence and the erasure of Arab Palestine. Over twenty months, thousands of Jews and Arabs came from all over the world to join those already on the ground to fight in the ranks of the Israel Defense Forces and the Arab Liberation Army. With this book, the young men and women who made up these armies come to life through their letters home, writing about everything from daily life to nationalism, colonialism, race, and the character of their enemies. Shay Hazkani offers a new history of the 1948 War through these letters, focusing on the people caught up in the conflict and its transnational reverberations.

Dear Palestine also examines how the architects of the conflict worked to influence and indoctrinate key ideologies in these ordinary soldiers, by examining battle orders, pamphlets, army magazines, and radio broadcasts. Through two narratives—the official and unofficial, the propaganda and the personal letters—Dear Palestine reveals the fissures between sanctioned nationalism and individual identity. This book reminds us that everyday people's fear, bravery, arrogance, cruelty, lies, and exaggerations are as important in history as the preoccupations of the elites.

Shay Hazkani is Assistant Professor of History and Jewish Studies at the University of Maryland, College Park.

"Shay Hazkani opens an entirely new vista on the Nakba. With methodological bravery and archival rigor, he carefully unfolds the stories and words of everyday soldiers and civilians, to reveal the divisions and fractures, the uncomfortable truths, and the surreal alliances that began to consolidate the 'Arab' and the 'Jew' as mutually exclusive categories."

"Reading a rich collection of letters, this seminal work examines ordinary people who find themselves in extraordinary situations. Shay Hazkani's microhistories explore how war dehumanizes some people and humanizes others; how individuals succumb to, but also resist, propaganda efforts; and how perpetrators and victims interpret, and mediate to others, the traumatic and violent events they lived through."

"Shay Hazkani makes a brilliant contribution to the literature on the 1948 Palestine War, documenting the views of the Arab and Jewish soldiers who fought in the war through letters seized by the Israeli censors. Impeccably balanced and engagingly written, Dear Palestine is a remarkable book that deserves the very widest readership."

"Hazkani's book does not completely overturn our view of the past, but it does add nuance, proving that it was possible, even in the early years of the state, for Israelis to view their Arab and Palestinian neighbors less hatefully than the Israeli leadership at the time had wanted. This enmity and nationalism were produced with much effort, as a result of systematic indoctrination. And if such animus was not always present in the past, it may not have to remain a part of our future."

"Dear Palestine is not just another book about the 1948 war. Even though it continues the growing tendency of historians to shift the gaze toward microhistory, it does more than that. It takes us on a fascinating journey to the space between efforts of official indoctrination and the unpredictable ways in which they are processed."

"Hazkani's claims for a new narrative do not rely on reconstructions of individual experiences deviating from the binary logic of nationalist sentiments alone. By juxtaposing the opposing narratives side by side, he argues for a more comprehensive assessment of how Zionist identity was constituted and challenged."

"Hazkani has followed an intuitive but all too infrequently traveled path in attempting a shared history of Jews and Arabs in Palestine in 1948. He attempts a fusion of historical horizons by joining a careful analysis of wartime propaganda by both sides with the honest accounts of soldiers on the ground. This interplay of top-down and bottom-up sources yields striking dissonance, which a skilled historian such as Hazkani uses to great advantage."

"Dear Palestine marks a paradigm shift in the study of the relations between Jews and Arabs... It is a story that quietly defies monolithic and binary perceptions passed down by nationalist histories. In their stead, Hazkani offers a relational account that listens to a more nuanced human network which steers this commendable and unpretentiously radical book."