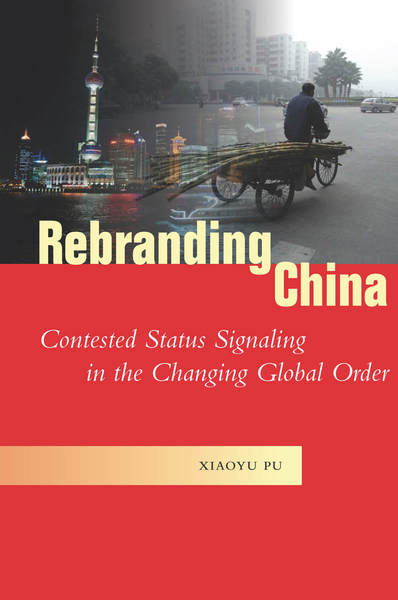 China is intensely conscious of its status, both at home and abroad. This concern is often interpreted as an undivided desire for higher standing as a global leader. Yet, Chinese political elites heatedly debate the nation's role as it becomes an increasingly important player in international affairs. At times, China positions itself not as a nascent global power but as a fragile developing country. Contradictory posturing makes decoding China's foreign policy a challenge, generating anxiety and uncertainty in many parts of the world. Using the metaphor of rebranding to understand China's varying displays of status, Xiaoyu Pu analyzes a rising China's challenges and dilemmas on the global stage.

Xiaoyu Pu is Associate Professor of Political Science at the University of Nevada, Reno. He is also a Public Intellectuals Program Fellow with the National Committee on U.S.-China Relations.

"Xiaoyu Pu offers a thoughtful analysis of China's competing status-signaling behavior while at the same time advancing the study of status to new and exciting territories."

"In Rebranding China, Xiaoyu Pu offers an innovative and insightful analysis of the various and often contradictory ways that a rising China portrays itself on the international stage. This is a must read for anyone interested in China's foreign relations and China's domestic political development in the reform era."

"Xiaoyu Pu has written an original, insightful and creative book. Rebranding China elegantly explains China's otherwise contradictory images of itself as both a greatpower and a developing state."

"In this short and well-written monograph, Pu contributes many novel insights to both China studies and status politics studies....a must-read for anyone interested in China's foreign policy, status politics and international hierarchy."

"In this excellent, pathbreaking piece of scholarship, Pu...pushes us to consider non-material motives for state action and view signaling as more than just a means of communicating intentions and resolve....[This] is an impressive piece of scholarship, one which contributes simultaneously to theoretical work on signaling and status as well empirically to our understanding of the sources of PRC behavior on the international stage."

"Rebranding China sets out to debunk the notion that the rising China is desperately—even recklessly—committed to improving its status in the world. The book's greatest success is to remind readers of an important point that is sometimes overlooked: rising powers have complex incentives, some of which point toward reassuring or even system-strengthening behavior."

"Xiaoyu Pu's timely and important book on China's use of 'status signaling' is a welcome contribution. He argues that the origins, manifestations, and implications of 'status signaling' need to be examined to better understand China's external behavior.Pu's willingness to look inside the 'gray box' of Chinese foreign policy motivations and processes will stand up well over time."

"Rebranding China is an engaging work that not only pushes the boundaries of theoretical knowledge on status in international politics; it is also an original development of a budding research area—the so-called logic of positionality—that deserves greater attention in IR. In relation to scholarship on China's foreign policy, the book's discussion of the developing country role is a welcome addition to current conversations that tend to harp on China's rising status."

"Pu presents us with a nuanced picture about Beijing's attempts to propagate and reconcile its multifaceted images to different audiences....[He] makes important contributions to several research topics that engage international relations scholars."

"Pu's timely book provides a much-needed new perspective on China's rise, reminding us of the inadvisability of seeing China as a unitary state actor with a fixed strategic plan to take over the world. Rebranding China both advances and shows the fruitfulness of the line of inquiry on China and status."

"[Rebranding China] makes a number of important contributions and should help to inspire future research on status signaling in China and elsewhere."

"Xiaoyu Pu has given us an excellent analysis of China's contemporary foreign policy behavior....his book will be important in both theory-building and foreign policy analysis."

"Rebranding China offers an original and compelling explanation for the extraordinary difficulty scholars and policymakers have had in attempting to infer China's intentions...essential reading."

"Rebranding China bridges the literature on status and signaling while providing much-needed insight into Chinese foreign policy decision-making. It is a must-read that will generate even more exciting work in studies of rising power behavior."