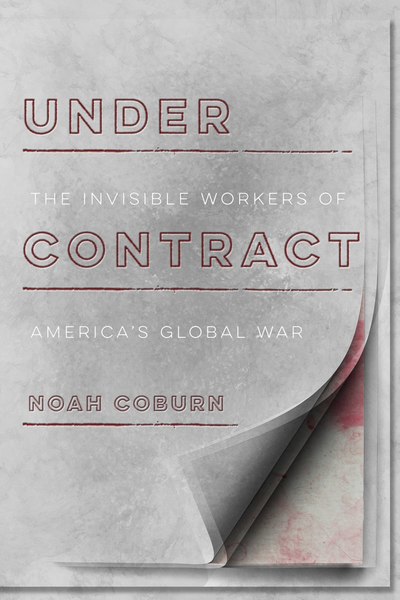 War is one of the most lucrative job markets for an increasingly global workforce. Most of the work on American bases, everything from manning guard towers to cleaning the latrines to more technical engineering and accounting jobs, has been outsourced to private firms that then contract out individual jobs, often to the lowest bidder. An "American" base in Afghanistan or Iraq will be staffed with workers from places like Sri Lanka, Bangladesh, the Philippines, Turkey, Bosnia, and Nepal: so-called "third-country nationals." Tens of thousands of these workers are now fixtures on American bases. Yet, in the plethora of records kept by the U.S. government, they are unseen and uncounted—their stories untold.

Noah Coburn traces this unseen workforce across seven countries, following the workers' often zigzagging journey to war. He confronts the varied conditions third-country nationals encounter, ranging from near slavery to more mundane forms of exploitation. Visiting a British Imperial training camp in Nepal, U.S. bases in Afghanistan, a café in Tbilisi, offices in Ankara, and human traffickers in Delhi, Coburn seeks out a better understanding of the people who make up this unseen workforce, sharing powerful stories of hope and struggle.

Part memoir, part travelogue, and part retelling of the war in Afghanistan through the eyes of workers, Under Contract unspools a complex global web of how modern wars are fought and supported, narrating war stories unlike any other. Coburn's experience forces readers to reckon with the moral questions of a hidden global war-force and the costs being shouldered by foreign nationals in our name.

Noah Coburn is Professor of Anthropology at Bennington College. He is one of the few contemporary anthropologists with years of on-the-ground field research experience in Afghanistan. He is the author of three previous books, most recently Losing Afghanistan: An Obituary for the Intervention (Stanford, 2016). His writing has been featured in The Washington Post, The New York Times, Foreign Affairs, and The Financial Times.

"In his vivid and insightful first-person account, Noah Coburn expands the scope and impact of modern warfare by unveiling the lives of subcontractors often supplied by human trafficking networks and always trapped in a shameful maze of greed and exploitation. Under Contract puts a human face on crucial issues in the prolonged U.S. war in Afghanistan, exposing the grim underworld of migrant workers."

—Ann Hagedorn, author of The Invisible Soldiers: How America Outsourced Our Security

"In this highly readable and disturbing account of the American war effort in Afghanistan, Noah Coburn traces the complex transnational web that has snared individuals from various countries in the conflict. A Gurkha story as well as war story, Under Contract chronicles not valor and glory, but poverty, human trafficking, and institutional racism. It will prove a useful resource for anyone interested in international relations, migration, and conflict."

—Deepak Thapa, co-author of A Kingdom under Siege: Nepal's Maoist Insurgency, 1996 to 2004

"With a vivid eye for detail, analytic lucidity, and compassion, Noah Coburn opens up a space between anthropology and investigative journalism. His journey to understand the human ripple effects of the war in Afghanistan takes him to Nepal, India, Turkey, the Republic of Georgia, and the U.K. in search of people who, often driven by economic desperation, worked for U.S. military contractors. A disturbing picture emerges: a world governed by massive inequalities and the brute realities of chance where some profit handsomely from war while others, dead or maimed for life, are treated as cheap, disposable, and conveniently invisible casualties of American intervention. An important account of a new neoliberal mode of warfare, vital reading for anyone interested in military affairs, Afghanistan, migration, and globalization."

"An irreplaceable and beautifully written book. Under Contract is one of the richest and most straightforward ethnographic accounts of war yet written. In focusing on the long and difficult paths of the contractors of the latest Afghan war, Coburn is the first to truly demonstrate the transnational and profit-driven nature of most modern war."

A Note on the Research