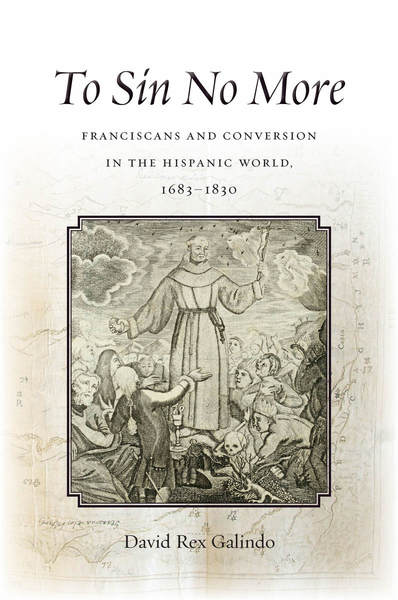 To Sin No More
Franciscans and Conversion in the Hispanic World, 1683-1830
David Rex Galindo

For 300 years, Franciscans were at the forefront of the spread of Catholicism in the New World. In the late seventeenth century, Franciscans developed a far-reaching, systematic missionary program in Spain and the Americas. After founding the first college of propaganda fide in the Mexican city of Querétaro, the Franciscan Order established six additional colleges in New Spain, ten in South America, and twelve in Spain. From these colleges Franciscans proselytized Indians in frontier territories as well as Catholics in rural and urban areas in eighteenth-century Spain and Spanish America.

To Sin No More is the first book to study these colleges, their missionaries, and their multifaceted, sweeping missionary programs. By focusing on the recruitment of non-Catholics to Catholicism as well as the deepening of religious fervor among Catholics, David Rex Galindo shows how the Franciscan colleges expanded and shaped popular Catholicism in the eighteenth-century Spanish Atlantic world. This book explores the motivations driving Franciscan friars, their lives inside the colleges, their training, and their ministry among Catholics, an often-overlooked duty that paralleled missionary deployments. Rex Galindo argues that Franciscan missionaries aimed to reform or "reawaken" Catholic parishioners just as much as they sought to convert non-Christian Indians.

"The Franciscan Colegios de Propaganda Fide have found their Gibbon! Deeply researched in more than a dozen Mexican, Spanish, and Bolivian archives, To Sin No More offers the first wide-ranging, subtle study of the activities of the twenty-nine colleges founded in Spain and Spanish America between 1683 and 1812 that reinvigorated and redirected the Franciscan evangelical ministry at a time when the mendicant orders were losing the pastoral assignments they had held since the sixteenth century. This book is a signal contribution to a trans-Atlantic perspective on Spanish American history during a "long" eighteenth century. And it unravels the paradox of an institutionalized spiritual revival movement flourishing in a time of Spanish regalism and Bourbon reforms that were meant to diminish the role of religion and the clergy in popular culture and public life."

"Thorough and erudite study of the foundation and expansion of the Colleges of Propaganda Fide and their critical role in reintroducing the missionary destiny of the Franciscans. This work is unrivaled in depth and analytical strength and places the Order under a new light as it changed from its original objective of converting the indigenous to Catholicism, to one of establishing a new moral compass in the Hispanic World."

"Franciscan friars trekked across rural areas in Iberia and southern France as well as through dangerous frontiers all over the New World to convert souls. In this ambitious, careful, and insightful work, David Rex Galindo explores the friars' recruitment, training, worldview, and techniques of conversion and examines their extraordinary program to bring the entire world into the Christian faith.To Sin No Moreis a foundational text that clarifies why the Seraphic Order was so central to the story of Spain proper and its extensive colonies overseas."

"Based upon an unrivaled mastery of the Franciscan archives of colonial Mexico, To Sin No More is the most important study in generations of missionaries and their preparation for work in the New World. Through his painstaking research David Rex Galindo takes us for the first time inside the classrooms, kitchens, dining rooms, libraries and chapels of missionary colleges of the Americas, where we learn about the rituals, customs, practices, and rivalries of the thousands of men who sought to gain salvation not only for themselves but for millions of indigenous people. Thus, in its creativity, clarity, and sheer depth of scholarship this book sets a new standard for interpretations of the institutions that sponsored, trained, housed, and supported the Franciscans who helped colonize the Americas. Future generations of students and scholars will be deeply indebted to this book."

"To Sin No More provides a compelling portrait of Franciscan ideals and of the men who put them into practice throughout the Hispanic world."

"I consider this book the most comprehensive study on the Colegios de Propaganda Fide so far. Its thorough archival and bibliographic research and its groundbreaking analysis of the data make it essential to understand one of the most important Franciscan missionary institutions."––Francisco Morales, OFM, Archivum Franciscanum Historicum

"Rex Galindo's deep archival research is matched by his thorough explanation of existing scholarship. His rich description of the recruitment, training, and social formation of Franciscan friars builds upon the work of Francisco Morales, blending intellectual history with ground-level social history.To Sin No More will be essential reading for researchers in church history, but also for those interested in early modern intellectual communities and the institutional structure of Atlantic empires."––Sean F. McEnroe, American Historical Review

"[Galindo's] mobile perspective is an intriguing contribution to Atlantic history, a field that tends to employ a wide lens to view people, goods, ideas, and institutions as these moved through contiguous regions....This study shows how Franciscans, through their colleges, became integral to Spain's imperial ambitions."