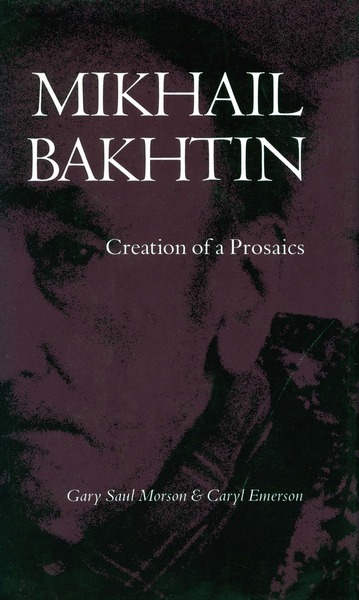 Books about thinkers require a kind of unity that their thought may not possess. This cautionary statement is especially applicable to Mikhail Bakhtin, whose intellectual development displays a diversity of insights that cannot be easily integrated or accurately described in terms of a single overriding concern. Indeed, in a career spanning some sixty years, he experienced both dramatic and gradual changes in his thinking, returned to abandoned insights that he then developed in unexpected ways, and worked through new ideas only loosely related to his earlier concerns

Small wonder, then, that Bakhtin should have speculated on the relations among received notions of biography, unity, innovation, and the creative process. Unity—with respect not only to individuals but also to art, culture, and the world generally—is usually understood as conformity to an underlying structure or an overarching scheme. Bakhtin believed that this idea of unity contradicts the possibility of true creativity. For if everything conforms to a preexisting pattern, then genuine development is reduced to mere discovery, to a mere uncovering of something that, in a strong sense, is already there. And yet Bakhtin accepted that some concept of unity was essential. Without it, the world ceases to make sense and creativity again disappears, this time replaced by the purely aleatory. There would again be no possibility of anything meaningfully new. The grim truth of these two extremes was expressed well by Borges: an inescapable labyrinth could consist of an infinite number of turns or of no turns at all.

Bakhtin attempted to rethink the concept of unity in order to allow for the possibility of genuine creativity. The goal, in his words, was a "nonmonologic unity," in which real change (or "surprisingness") is an essential component of the creative process. As it happens, such change was characteristic of Bakhtin's own thought, which seems to have developed by continually diverging from his initial intentions. Although it would not necessarily follow that the development of Bakhtin's thought corresponded to his ideas about unity and creativity, we believe that in this case his ideas on nonmonologic unity are useful in understanding his own thought—as well as that of other thinkers whose careers are comparably varied and productive.

"A ground breaking statement. . . . It cannot be ignored."

"Will remain the standard scholarly reference in English for years."