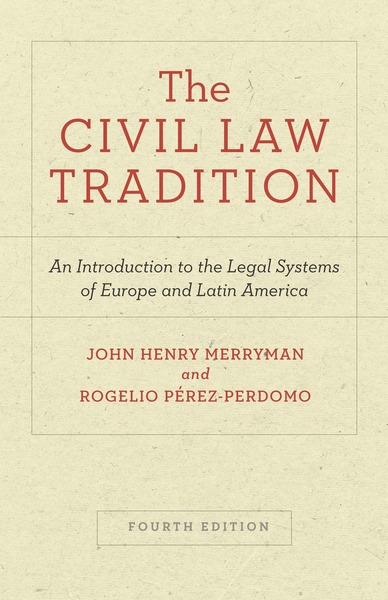 The Civil Law Tradition
An Introduction to the Legal Systems of Europe and Latin America, Fourth Edition
John Henry Merryman and Rogelio Pérez-Perdomo

Designed for the general reader and students of law, this is a concise history and analysis of the civil law tradition, which is dominant in most of Europe, all of Latin America, and many parts of Asia, Africa, and the Middle East. The fourth edition is fully updated to include the latest developments in the field and to correct and update historical details gleaned from newly-published research on Roman and Medieval law. In the past ten years, the legal profession has changed radically, with the growing international ubiquity of large law firms operating across borders (which was previously a uniquely American phenomenon). This new edition updates the book from the post-Soviet era to ongoing current issues, including Brexit and the status of the European Union. It discusses how civil law codes have shifted in some countries to adapt to modern and changing ideologies and also includes brand-new material on legal education, which is of central importance to the legal profession today.

John Henry Merryman (1920–2015) was the Nelson Bowman Sweitzer and Marie B. Sweitzer Professor of Law, Emeritus at Stanford University.

Rogelio Pérez-Perdomo is a law professor at the Universidad Metropolitana, Caracas.

PRAISE FOR THE FIRST EDITION:

"This little book is not only readable—a feat in itself—but also insightful and provocative in its treatment of the folklore and practice of the civil law. . . . A lively introduction to civil law thinking with its historical, political, and social dimensions."

—The American Journal of Comparative Law

"The most readable and succinct account of the origins, the development, and the philosophy of the civil law. . . . Written for those unfamiliar with the study of comparative law and legal systems, the book distinguishes the civil law tradition from that of the common law tradition of the English speaking countries. . ."

"Of value both to the undergraduate and graduate student of comparative politics, as well as the law student interested in comparative law. . . . A most useful introduction."

Preface to the Fourth Edition