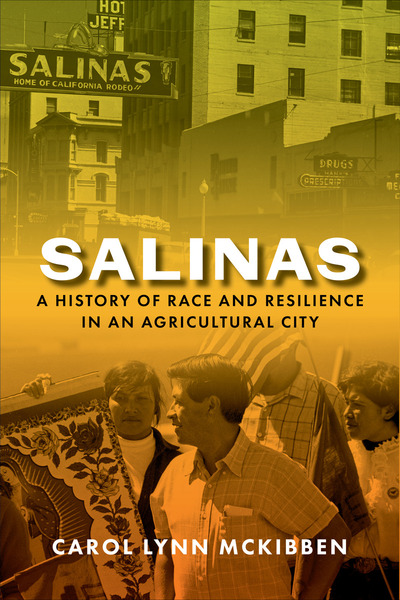 An ambitious history of a California city that epitomizes the history of race relations in modern America.

Although much has been written about the urban–rural divide in America, the city of Salinas, California, like so many other places in the state and nation whose economies are based on agriculture, is at once rural and urban. For generations, Salinas has been associated with migrant farmworkers from different racial and ethnic groups. This broad-ranging history of "the Salad Bowl of the World" tells a complex story of community-building in a multiracial, multiethnic city where diversity has been both a cornerstone of civic identity and, from the perspective of primarily white landowners and pragmatic agricultural industrialists, essential for maintaining the local workforce.

Carol Lynn McKibben draws on extensive original research, including oral histories and never-before-seen archives of local business groups, tracing Salinas's ever-changing demographics and the challenges and triumphs of Chinese, Japanese, Filipino, and Mexican immigrants, as well as Depression-era Dust Bowl migrants and white ethnic Europeans. McKibben takes us from Salinas's nineteenth-century beginnings as the economic engine of California's Central Coast up through the disproportionate impact of Covid-19 on communities of color today, especially farmworkers who already live on the margins.

Throughout the century-plus of Salinas history that McKibben explores, she shows how the political and economic stability of Salinas rested on the ability of nonwhite minorities to achieve a measure of middle-class success and inclusion in the cultural life of the city, without overturning a system based in white supremacy. This timely book deepens our understanding of race relations, economic development, and the impact of changing demographics on regional politics in urban California and in the United States as a whole.

Carol Lynn McKibben is a lecturer at Stanford University. She is director of the Salinas History Project and the author of two previous books on the history of Monterey County: Beyond Cannery Row: Sicilian Women, Immigration, and Community in Monterey, 1915-1999 (2006) and Racial Beachhead: Diversity and Democracy in a Military Town (2012).

"Salinas is a sensitive yet critical history of how a unique urban-rural place in California navigated its growth as a farming empire and increasingly multiracial community. Long-established and impassioned community historian Carol Lynn McKibben has created a chronicle of Steinbeck Country that inspires fascination, respect, debate, and reflection."

"This important and engaging study of Salinas tells a vital story of racial divides—of how they have at times been exacerbated, but also often crossed, and sometimes even dissolved. A major contribution to California history, the history of race relations, urban history, agricultural history, and oral history."

"I can see [Salinas] being studied by scholars and teachers in a variety of disciplines for years to come, both for the story it tells and for how to conduct the research that made it possible."

"As someone who grew up near Salinas, I appreciate McKibben's lucid and thoughtful history of the area. Her use of interviews and oral histories is especially strong and fits seamlessly into the narrative. The book also possesses a very strong sense of Salinas's various neighborhoods and its outlying fields."

"Historians familiar with Salinas are likely to think of it as either the setting for several novels by John Steinbeck or as a site where the United Farm Workers merged civil and labor rights in agricultural fields during the 1970s. As I grew up in the Bay Area during the 1980s, Salinas came up in conversations when talking about crime and gang activity. In her recent book on the history of Salinas, Carol Lynn McKibben engages each of these subjects while asking us to rethink what we know of this central California city."

"Although this book is largely a local history, it ripples outward to include the economy and demographics of the greater central-California region, statewide immigration (and migration) developments, and evolving federal immigration policy... With this layered approach,Salinascontributes to our understanding of cities embedded in rural regions with agricultural economies, and of city-building processes in the context of race relations during periods of rapid demographic change."

"McKibben persuaded me that over the course of Salinas's history, city leaders have developed the capacity to reach out and involve Hispanics and members of multiple Asian groups, no small achievement. The book should be of interest to academics and practitioners and would be a suitable supplementary text for courses in urban history, urban politics, race/ethnic relations, and city planning."

The story of Salinas: How Salinas outpaced Alisal, Castroville