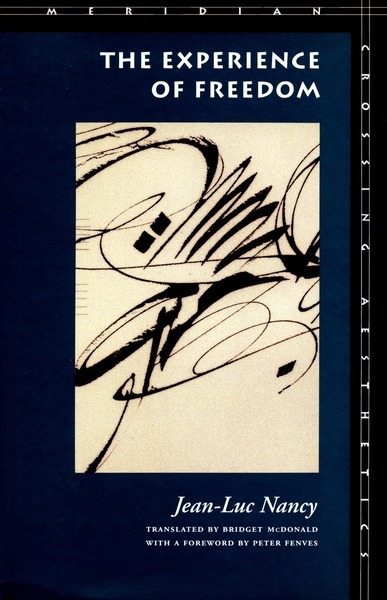 This is the most systematic, the most radical, and the most lucid treatise on freedom that has been written in contemporary Continental philosophy. Finding its guiding motives in Kant's second Critique and working its way up to and beyond Heidegger and Adorno, this book marks the most advanced position in the thinking of freedom that has been proposed after Sartre and Levinas. One could call it a fundamental ontology of freedom if freedom, according to the author, did not entail liberation from foundational acts and the overcoming of any logic that determines the way ontology does, by positing being either as self-sufficient position or as subjected to strictly immanent laws.

Once existence no longer offers itself as an empiricity that must be related to its conditions of possibility or sublated in a transcendence beyond itself, but instead as sheer factuality, we must think this fact, the fact of existence as the essence of itself, as freedom. The question is no longer "Why is there something rather than nothing?" Instead, it becomes "Why these very questions by which existence affirms itself and abandons itself in a single gesture?" If we do not think being itself as a freedom, we are condemned to think of freedom as pure "Idea" or "right," and being-in-the-world, in turn, as a blind and obtuse necessity. Since Kant, philosophy and our world have relentlessly confronted this scission.