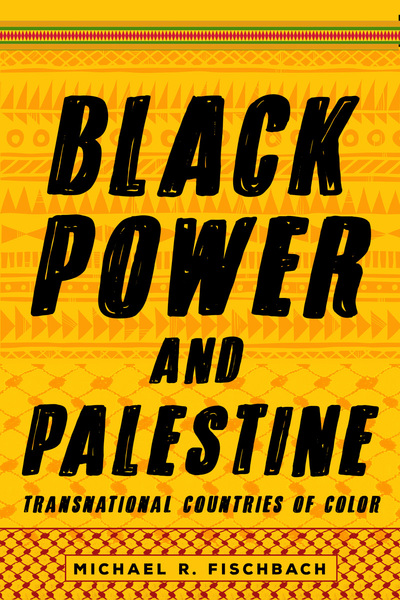 The 1967 Arab–Israeli War rocketed the question of Israel and Palestine onto the front pages of American newspapers. Black Power activists saw Palestinians as a kindred people of color, waging the same struggle for freedom and justice as themselves. Soon concerns over the Arab–Israeli conflict spread across mainstream black politics and into the heart of the civil rights movement itself. Black Power and Palestine uncovers why so many African Americans—notably Martin Luther King, Jr., Malcolm X, and Muhammad Ali, among others—came to support the Palestinians or felt the need to respond to those who did.

In chronicling this story, Fischbach reveals much about how American peoples of color create political strategies, a sense of self, and a place within U.S. and global communities. The shadow cast by events of the 1960s and 1970s continues to affect the United States in deep, structural ways. This is the first book to explore how conflict in the Middle East shaped the American civil rights movement.

Michael R. Fischbach is Professor of History at Randolph-Macon College. The author of four previous books, he was awarded grants by The MacArthur Foundation and the United States Institute of Peace. He has presented at numerous academic and diplomatic settings in sixteen countries on four continents.

"Michael R. Fischbach explores one of the most important international ramifications of the political awakening of African Americans in the 20th century: how movements ranging from the Black Muslims and Black Panthers to SNCC and the NAACP related to the Palestinian struggle. Original and timely, Black Power and Palestine offers fascinating insight into a vital issue in the self-definition of the African American community, one that continues to have great relevance today in the growing linkages between the Black Lives Matter movement and Palestinian activism."

—Rashid Khalidi, Columbia University, author of Brokers of Deceit: How the U.S. Has Undermined Peace in the Middle East

"Black Power and Palestine is an indispensable read on the civil rights and Black Power era, shedding new light on just how deeply the Arab-Israeli conflict has shaped black domestic politics. Anyone interested in why conflict in the Middle East continues to cast its long shadow over U.S. foreign and domestic policy should read this book."

—Cynthia A. Young, The Pennsylvania State University, author of Soul Power: Culture, Radicalism, and the Making of a U.S. Third World Left

"Fischbach's work is nothing short of an historical tour de force, shedding light on the interplay between Black activist spheres of the 1960s and '70s and their wider world.... A masterpiece of investigative research, this book is the fruit of many years spent deep in the archives, chasing down government documents, and of extensive interviews with activists and key players....Black Power and Palestine is without doubt a fresh, invaluable addition to the canons of Black struggle and the Israeli-Palestinian conflict."

"[A] meticulously researched history of the ties between the Black and Palestinian liberation struggles from the 1960s to the 1980s.... Fischbach explores how the Black Power movement of the 1960s embraced the Palestinian cause and how this eventually influenced moderate civil rights organizations that had unquestioningly supported Israel....Black Power and Palestine is essential reading."

"Fischbach offers a fascinating account of the under-examined, little-known relationship between Black Power and Palestinian activists. This well-documented book demonstrates how black militants aligned themselves with the Palestinian cause as a result of their international, anti-imperialist struggle for liberation...Most significant, this book dispels the notion of an American domestic consensus with regard to the Arab-Israeli conflict, and points the reader toward the nuanced ways in which this conflict has impacted American society...Highly recommended."

"Black Power and Palestine: Transnational Countries of Color by Michael Fischbach is a unique and necessary contribution to the fields ofblack, Middle Eastern, and world history. It creates a panoramic and simultaneously nuanced narrative about the history of Black Power solidarity with Palestinians."––Nadia Alahmed, H-Diplo

"Michael Fischbach's Black Power and Palestine is the best book yet written on the contemporary history of Afro-Palestinian solidarity. The book is invaluable as a scholarly record of Black efforts to organize with and in support of Palestinian liberation, but also as a political argument about the centrality of Palestinian solidarity work to building internationalist, anti-imperialist solidarity in our time."––Bill V. Mullen, Mondoweiss

"Fischbach's book makes two major contributions to the field of of Black-Palestinian solidarity: first, a nuanced understanding of politics and second, an insistence on the significance of the historical moment. Resonances with today's headlines fill the book.Fischbach's historically driven narrative stands at the cutting edge of scholarship on the Black Power movement."

"Black Power and Palestine is history at its best. Well-researched and interesting to read, it attests to the long-term impact that grass-roots activists can have, though it may not be recognised at the time. Fischbach delves into the recent past to elucidate a pivotal time and issue that still has prime relevance today."

"Black Power and Palestine makes a crucial intervention by excavating a rather forgotten history that undermines any notion of a timeless American consensus over U.S. Middle East policy and proposes a genealogy of the opposition to the occupation of the Palestinian territories and the treatment of Palestinians there and in the diaspora."

Black Power and Palestine is a remarkable and timely study about solidarity between the struggle of African Americans and Palestinian Resistance. This well- researched study is in ten chapters, with a prologue, epilogue, and extensive notes. Although the struggle of African Americans has been acknowledged by scholars, black affiliations with Palestinians have not received scholarly attention. Black Power and Palestine fills the gap in the literature about the mutual connections between the two struggles."