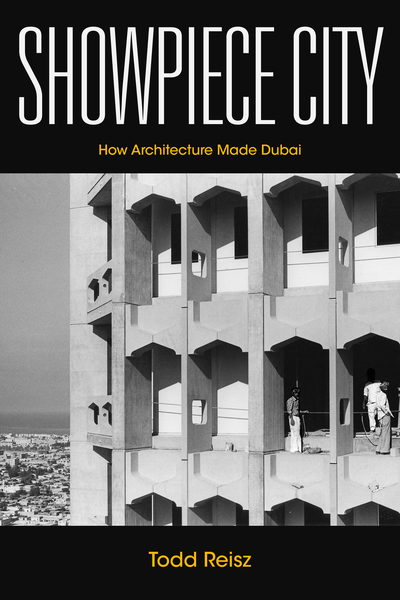 Staggering skylines and boastful architecture make Dubai famous—this book traces them back to a twentieth-century plan for survival.

In 1959, experts agreed that if Dubai was to become something more than an unruly port, a plan was needed. Specifically, a town plan was prescribed to fortify the city from obscurity and disorder. With the proverbial handshake, Dubai's ruler hired British architect John Harris to design Dubai's strategy for capturing the world's attention—and then its investments.

Showpiece City recounts the story of how Harris and other hired professionals planned Dubai's spectacular transformation through the 1970s. Drawing on exclusive interviews, private archives, dog-eared photographs, and previously overlooked government documents, Todd Reisz reveals the braggadocio and persistence that sold Dubai as a profitable business plan. Architecture made that plan something to behold. Reisz highlights initial architectural achievements—including the city's first hospital, national bank, and skyscraper—designed as showpieces to proclaim Dubai's place on the world stage.

Reisz explores the overlooked history of a skyline that did not simply rise from the sands. In the city's earliest modern architecture, he finds the foundations of an urban survival strategy of debt-wielding brinkmanship and constant pitch making. Dubai became a testing ground for the global city—and prefigured how urbanization now happens everywhere.

Todd Reisz lives in Amsterdam and is an architect and writer. His work has been featured in The Guardian, Architectural Design, and Artforum. He has taught architectural and urban design at Yale University and Harvard University.

"Showpiece City is a meticulous reconstruction of the 'creation' of Dubai. With impeccable timing, Todd Reisz presents one of the key stories of the history of globalization—at the moment of its uncertain future."

"Todd Reisz offers a gold mine of new material, giving both historical and contemporary explanation of the dynamics that have shaped Dubai. In its elegant prose, Showpiece City is a major contribution to the history of the region and of global cities in general."

"Gripping and insightful, Showpiece City is a much-needed history of the making and remaking of Dubai. Todd Reisz masterfully depicts the complex struggles between local rulers, merchants, colonial administrators, and various consultants that undergirded planning logics. A must-read for anyone interested in architecture and urban planning."

"Dubai has long been catnip for Western journalists, vilified as a metastasizing ahistorical Gomorrah that operates according to the logic of the airport and the amusement park. Finally, Showpiece City offers up a vivid and unusually writerly account of the emirate that gives lie to the unimaginative one-liner. Todd Reisz sensitively takes us back in time, narrating the genesis of delirious Dubai as we know it through the stories of its hodgepodge residents, leaders and, crucially, the first generation of architects and town planners who gave shape to this endlessly interesting strip of land."

"With capering prose and taut storytelling, Reisz begins to rebuild Dubai around the winding Creek, highlighting the successes and failures that shaped the foundations of the city as we know it today."

"Showpiece City is an impressive achievement and contribution to the rapidly growing subfield of Middle East urban studies... This is a ground-breaking book that provides original insight into the minutia of Dubai in the 1950s to the 1970s while simultaneously contributing to larger debates on the urban history of power and space."

"[Showpiece City is a tour de force of archival research, and it helps dismantle the common stereotypical assumption that Dubai is a 'fake city,' a 'shallow city,' or that which was created overnight out of nothing. Reisz's meticulous usage of primary sources raises the bar for other architectural historians."