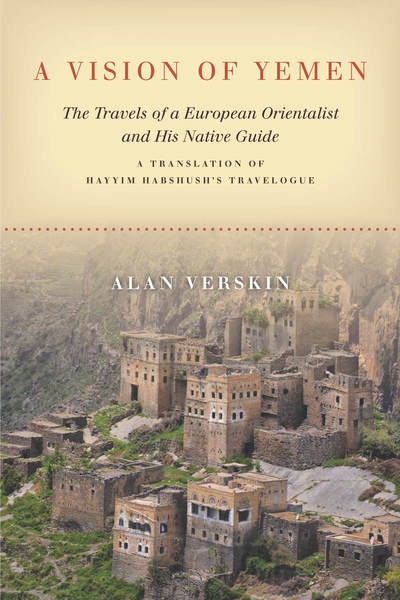 A Vision of Yemen
The Travels of a European Orientalist and His Native Guide, A Translation of Hayyim Habshush's Travelogue
Alan Verskin

Honorable Mention in the 2021 Aldo and Jeanne Scaglione Prize for a Translation of a Literary Work, sponsored by the Modern Language Association (MLA).

In 1869, Hayyim Habshush, a Yemeni Jew, accompanied the European orientalist Joseph Halévy on his archaeological tour of Yemen. Twenty years later, Habshush wrote A Vision of Yemen, a memoir of their travels, that provides a vivid account of daily life, religion, and politics. More than a simple travelogue, it is a work of trickster-tales, thick anthropological descriptions, and reflections on Jewish–Muslim relations. At its heart lies the fractious and intimate relationship between the Yemeni coppersmith and the "enlightened" European scholar and the collision between the cultures each represents. The book thus offers a powerful indigenous response to European Orientalism.

This edition is the first English translation of Habshush's writings from the original Judeo-Arabic and Hebrew and includes an accessible historical introduction to the work. The translation maintains Habshush's gripping style and rich portrayal of the diverse communities and cultures of Yemen, offering a potent mixture of artful storytelling and cultural criticism, suffused with humor and empathy. Habshush writes about the daily lives of men and women, rich and poor, Jewish and Muslim, during a turbulent period of war and both Ottoman and European imperialist encroachment. With this translation, Alan Verskin recovers the lost voice of a man passionately committed to his land and people.

Alan Verskin is Associate Professor of History at the University of Rhode Island.

"Alan Verskin has provided a masterful translation of Hayyim Habshush's gripping account of his travels and a rare and intimate glimpse into Jewish and Muslim life in the Arabian hinterlands. A Vision of Yemen should be of great interest not only to students and scholars of Jewish, Islamic, and Middle Eastern history, but also to the wider audience of travel literature."

—Norman A. Stillman, University of Oklahoma

"A Vision in Yemen reveals Hayyim Habshush's remarkable curiosity about his own society in nineteenth-century Yemen and its ancient history. With his masterful translation, Alan Verskin elucidates time and place for modern readers, bringing Habshush and his European interlocutors to life."

"Alan Verskin's book goes a long way in countering the various orientalist tropes that have often characterised our understanding of Yemeni Jews by rendering accessible the travelogue A Vision of Yemen....It enhances our understanding of encounters between East and West, and more importantly is a testament to Muslim-Jewish relations in the Middle East just as cacophonous sectarian voices dominate the region's public discourse."