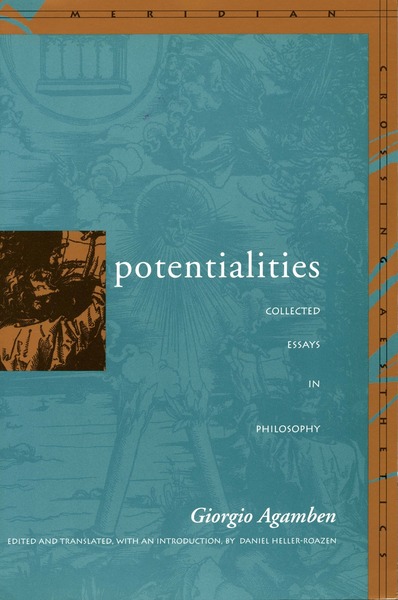 This book collects fifteen major philosophical essays written over a period of more than twenty years by acclaimed Italian philosopher Giorgio Agamben. The volume opens with an introduction in which the editor situates Agamben's work with respect to both the history of philosophy and contemporary European thought. The essays that follow articulate a series of theoretical confrontations with privileged figures in the history of philosophy, politics, and criticism, from Plato to Spinoza, Aristotle to Deleuze, Carl Schmitt to Benjamin, Hegel to Aby Warburg, and Heidegger to Derrida. Three fundamental concepts organize the collection as a whole: language, in the sense not of particular statements but rather the very taking place of speech, the pure fact of language's existence; history, as it appears from a perspective in which tradition, transmission, and memory reach their messianic fulfillment; and potentiality, understood as a fundamental problem of metaphysics, ethics, and the philosophy of language. All these topics converge in the final part of the book, in which Agamben offers an extensive reading of Melville's short story "Bartleby the Scrivener" as a work that puts potentiality and actuality, possibility and reality, in an altogether new light.

Giorgio Agamben, an Italian philosopher and political theorist, teaches at the IUAV University in Venice and holds the Baruch Spinoza Chair at the European Graduate School. His most recent works available in English translation from Stanford University Press include "What is an Apparatus?" and Other Essays (2009), Nudities (2010), The Sacrament of Language(2011), and The Kingdom and the Glory (2011).

"Agamben has been attracting attention recently in the English-speaking world, thanks to the increasing availability of his work in translation. This volume is indicative of Agamben's broad range of interests. . . . Despite this range of interests, however, a sustained commitment to certain theoretical issues—particularly language and history—lends the volume a coherence. . . . Daniel Heller-Roazen's introduction does a nice job of outlining the philosophical program that motivates these essays, and his translation in general is to be commended for its elegance. Upper-division undergraduates through faculty and researchers."