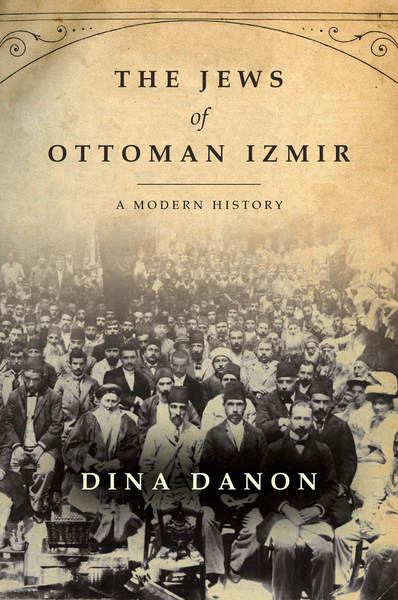 By the turn of the twentieth century, the eastern Mediterranean port city of Izmir had been home to a vibrant and substantial Sephardi Jewish community for over four hundred years, and had emerged as a major center of Jewish life. The Jews of Ottoman Izmir tells the story of this long overlooked Jewish community, drawing on previously untapped Ladino archival material.

Across Europe, Jews were often confronted with the notion that their religious and cultural distinctiveness was somehow incompatible with the modern age. Yet the view from Ottoman Izmir invites a different approach: what happens when Jewish difference is totally unremarkable? Dina Danon argues that while Jewish religious and cultural distinctiveness might have remained unquestioned in this late Ottoman port city, other elements of Jewish identity emerged as profound sites of tension, most notably those of poverty and social class. Through the voices of both beggars on the street and mercantile elites, shoe-shiners and newspaper editors, rabbis and housewives, this book argues that it was new attitudes to poverty and class, not Judaism, that most significantly framed this Sephardi community's encounter with the modern age.

Dina Danon is Assistant Professor of Judaic Studies and History at Binghamton University.

"Dina Danon opens new windows onto the changing socioeconomic realities and values of Jews in a major port city of the late Ottoman Empire. Those interested in modern Jewish and Ottoman history alike have much to learn from this fascinating study."

"In this skillfully researched and beautifully written book, Dina Danon gives voice to Jews from various social and economic backgrounds. In the best tradition of social history, she masterfully relates their experiences in an often overlooked corner of the Ottoman Sephardi world to the broader forces that reshaped their city, region, and the nineteenth-century world."

"The hard work Danon invested in the book is evident in its convincing narrative, its clear and accessible style, and its generous scientific apparatus. It is safe to assume that henceforth this monograph will be regarded as the central work on the Jews of Izmir in the last Ottoman century."

"This work provides a major contribution to the study of a Jewish community in general, and an Ottoman one in particular."

"This eloquently written and expertly researched book is the outcome of Dina Danon's work over the past decade. It reflects Danon's original approach and scholarship. The book deals with the Jewish community of Izmir during the late Ottoman period. This is an important addition to our knowledge of this overlooked community at a time of tremendous changes about which we still know very little."

"Danon has succeeded in describing and analyzing how social and economic conditions led to communal struggles and the desire for change. ... [H]er book is a singular contribution and an important landmark for future research on other Sephardic communities in modern times."

"Dina Danon's new book is an excellent work of social history that significantly enhances our understanding of Ottoman Jewish history in the late imperial period. It does so in a multi-layered way, such that it ultimately consists of more than its title suggests—that is, a history of the Jews of Izmir (though it is that, as well)...[T]hanks to Danon's deft handling of the tools of social history, and her attentiveness to an array of studies of the Ottoman empire in this period, what emerges is a portrait of social stratification in late Ottoman Izmir writ large."