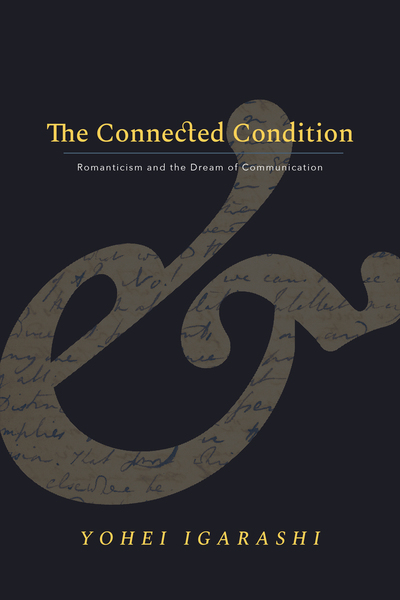 The Romantic poet's intense yearning to share thoughts and feelings often finds expression in a style that thwarts a connection with readers. Yohei Igarashi addresses this paradox by reimagining Romantic poetry as a response to the beginnings of the information age. Data collection, rampant connectivity, and efficient communication became powerful social norms during this period. The Connected Condition argues that poets responded to these developments by probing the underlying fantasy: the perfect transfer of thoughts, feelings, and information, along with media that might make such communication possible.

This book radically reframes major poets and canonical poems. Igarashi considers Samuel Taylor Coleridge as a stenographer, William Wordsworth as a bureaucrat, Percy Shelley amid social networks, and John Keats in relation to telegraphy, revealing a shared attraction and skepticism toward the dream of communication. Bringing to bear a singular combination of media studies, the history of communication, sociology, rhetoric, and literary history, The Connected Condition proposes new accounts of literary difficulty and Romanticism. Above all, this book shows that the Romantic poets have much to teach us about living with the connected condition and the fortunes of literature in it.

Yohei Igarashi is Assistant Professor of English at the University of Connecticut.

"The Connected Condition is a brilliant, nuanced, and elegantly written work on media as concept and practice in the Romantic period. Writing about the 'dream of communication,' Yohei Igarashi restages through intriguing research and deft theoretical argument what earlier generations of Romanticists hallowed as imagination."

"This elegantly framed book cuts to the core of what the literary is, where it came from in English letters, and what it's for today. Yohei Igarashi's Romantic authors are pioneers seized by the quintessentially modern problem of communication—its imperative, norms, and all but certain failures."

"The connections forged in the pages of The Connected Condition are revelatory, not least because they are pursued with tact, wit, and serious learning. As a critic, Yohei Igarashi combines the gifts and the practices of several generations of scholars, and he makes us think about the long-term gestation of our most recent preoccupations with communication, information, and efficiency. Never has the power of the norm appeared more exciting."

"A transformative contribution to the vital subfield of Romantic media studies....What emerges as a result of Igarashi's innovative methodology is no less than an entirely original vision of Romantic poetics as a unique kind of communicative order."

"Igarashi's timely new book ... takes a fresh look at the conflicted relationship between poetic distinction and the 'fantasy of perfectible contact' by considering it in conjunction with the emergence of a modern communications order...The Connected Condition forwards a way of doing media studies-informed poetry criticism... Igarashi's chapters convincingly demonstrate that norms of efficiency influence Romantic formal practices, often in surprising ways."

"Igarashi presents a persuasive vision of the Romantic period as a proto-networked era and these Romantic poets as thinkers and writers who engaged with the conventions and fantasies of communication in their period."

"The impact of 'reimagin[ing] Romantic poeticity as shaped by the modern world of communication' is, I believe, even larger than Igarashi would hope. The interpretations offered at the level of detail throughout this book, as to how theories of communication enter into specific passages of poetry, transform 'Romanticism' as we know it. But The Connected Condition does much more as well . . . examining the effects of living in a communicative regime, using its technologies on a daily, habitual basis, and the effects of 'internalizing the logic associated with efficient communications media and technologies' so that even the activity of protesting against that logic must take heed of its forms."

The Cliché Writes Back