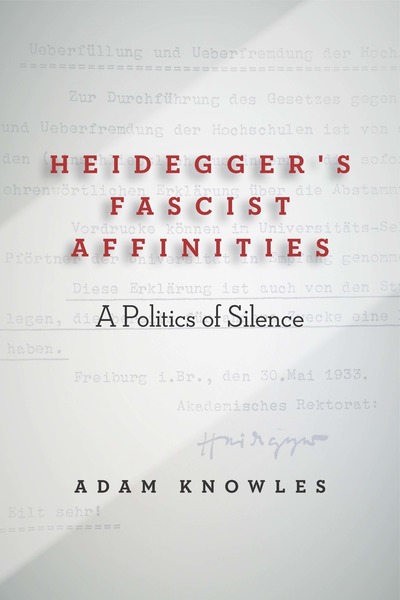 Reexamining the case of one of the most famous intellectuals to embrace fascism, this book argues that Martin Heidegger's politics and philosophy of language emerge from a deep affinity for the ethno-nationalist and anti-Semitic politics of the Nazi movement. Himself a product of a conservative milieu, Heidegger did not have to significantly compromise his thinking to adapt it to National Socialism but only to intensify certain themes within it. Tracing the continuity of these themes in his lectures on Greek philosophy, his magnum opus, Being and Time, and the notorious Black Notebooks that have only begun to see the light of day, Heidegger's Fascist Affinities argues that if Heidegger was able to align himself so thoroughly with Nazism, it was partly because his philosophy was predicated upon fundamental forms of silencing and exclusion. With the arrival of the Nazi revolution, Heidegger displayed—both in public and in private—a complex, protracted form of silence drawn from his philosophy of language. Avoiding the easy satisfaction of banishing Heidegger from the philosophical realm so indebted to his work, Adam Knowles asks whether what drove Heidegger to Nazism in the first place might continue to haunt the discipline. In the context of today's burgeoning ethno-nationalist regimes, can contemporary philosophy ensure itself of its immunity?

"Heidegger's insistence on the authority of the silent led him to view National Socialism as a panacea for modernity's technological attempt to render transparent all that is spoken and known. Adam Knowles's exceptional book opens up a new window onto the philosopher's embrace of Nazism and its attack on World Jewry."

"Adam Knowles integrates a rigorous reading of Heidegger's published writings and lecture courses with a nuanced discussion of the notorious Black Notebooks. The result is a new and challenging approach to the philosopher's silence about the Holocaust that cannot be ignored."

"Adam Knowles's innovative and elegantly written book invites everyone concerned about the impact of authoritarian regimes to ponder the past—and the present—anew. Knowles illuminates the integral nature of Heidegger's politics and philosophy with amazing clarity, never losing sight of the big-picture question: how the humanities respond to totalitarian rule."

"[Heidegger's Fascist Affinities] raises grave questions about Heidegger's thought, politics and continuing reception, as well as their relation to the intellectual foundations of Nazism, and the relationship between philosophy and authoritarianism. The book deserves and will reward critical debate."