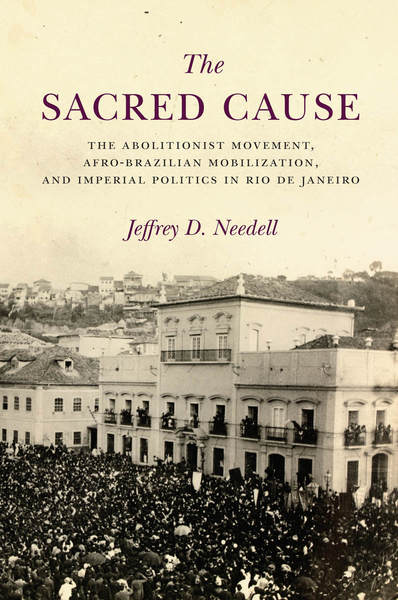 For centuries, slaveholding was a commonplace in Brazil among both whites and people of color. Abolition was only achieved in 1888, in an unprecedented, turbulent political process. How was the Abolitionist movement (1879-1888) able to bring an end to a form of labor that was traditionally perceived as both indispensable and entirely legitimate? How were the slaveholders who dominated Brazil's constitutional monarchy compelled to agree to it?

To answer these questions, we must understand the elite political world that abolitionism challenged and changed—and how the Abolitionist movement evolved in turn. The Sacred Cause analyzes the relations between the movement, its Afro-Brazilian following, and the evolving response of the parliamentary regime in Rio de Janeiro. Jeffrey Needell highlights the significance of racial identity and solidarity to the Abolitionist movement, showing how Afro-Brazilian leadership, organization, and popular mobilization were critical to the movement's identity, nature, and impact.

Jeffrey D. Needell is Professor of History and Latin American Studies at the University of Florida. He is the author of A Tropical Belle Epoque: Elite Culture and Society in Turn-of-the-Century Rio de Janeiro (1987) and The Party of Order: The Conservatives, the State, and Slavery in the Brazilian Monarchy, 1831-1871 (2006), and is the editor of Emergent Brazil: Key Perspectives on a New Global Power (2015).

"This is the first comprehensive history of Brazilian abolitionism that underscores Afro-Brazilians' central role in achieving emancipation. Based on an impressive array of archival sources and new information, Needell's book explains in detail why Brazil was the last country to abolish slavery in the Americas and how, unlike in the United States, emancipation did not provoke a Civil War."

"Needell offers a compelling reappraisal of the political drama surrounding the abolition of slavery in Brazil, placing the dance between formal institutions and popular mobilization at the story's center.This comprehensive analysis of Afro-Brazilians' critical role in the eventual victory of abolitionism, capping decades of painstaking archival work, should become the new standard for the field."

This excellent study supplies a fresh and timely account of events that still challenge us."

"Beyond offering vital information about what happened, this work is valuable for its analysis, which links a traditional narrative of high politics in the late Empire of Brazil with an examination of how popular forces, particularly Afro-Brazilian political mobilization, factored into the history....Highly recommended."