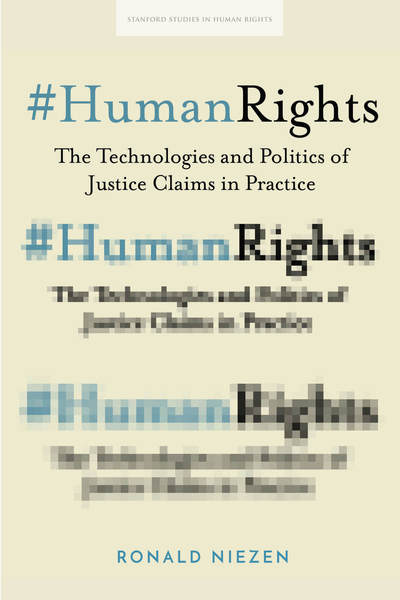 Social justice and human rights movements are entering a new phase. Social media, artificial intelligence, and digital forensics are reshaping advocacy and compliance. Technicians, lawmakers, and advocates, sometimes in collaboration with the private sector, have increasingly gravitated toward the possibilities and dangers inherent in the nonhuman. #HumanRights examines how new technologies interact with older models of rights claiming and communication, influencing and reshaping the modern-day pursuit of justice.

Ronald Niezen argues that the impacts of information technologies on human rights are not found through an exclusive focus on sophisticated, expert-driven forms of data management but in considering how these technologies are interacting with other, "traditional" forms of media to produce new avenues of expression, public sympathy, redress of grievances, and sources of the self. Niezen considers various ways that the pursuit of justice is happening via new technologies, including crowdsourcing, social media–facilitated mobilizations (and enclosures), WhatsApp activist networks, and the selective attention of Google's search engine algorithm. He uncovers how emerging technologies of data management and social media influence the ways that human rights claimants and their allies pursue justice, and the "new victimology" that prioritizes and represents strategic lives and types of violence over others. #HumanRights paints a striking and important panoramic picture of the contest between authoritarianism and the new tools by which people attempt to leverage human rights and bring the powerful to account.

Ronald Niezen is the Katharine A. Pearson Chair in Civil Society and Public Policy in the Faculty of Law and in the Department of Anthropology at McGill University.

"What is the connection between emerging information technologies and the rise of global human rights? Ronald Niezen addresses this question with imagination and acuity, exploring the extent to which their interplay portends a future of greater political domination, emancipatory potential, or a complex mix of both. A critical issue, and book, worthy of very close attention."

"No longer confined to the courts and clinical reports, the discourse of human rights is now claimed by activists marching in the streets, spray-painted on urban walls, and invoked to enroll participants and engage allies through social media. Ronald Niezen's groundbreaking and insightful book tracks the emergence of these new mediascapes and compellingly explains why they matter."

—Stuart Kirsch, author of Engaged Anthropology: Politics beyond the Text

"#HumanRights shines much-needed light on the use of digital information to illuminate human rights violations around the world. Ronald Niezen spotlights how human rights advocates' embrace of innovative methodologies is shifting the field of practice—to corroborate survivors' stories, verify contested facts, and ultimately contribute to the realization of justice."