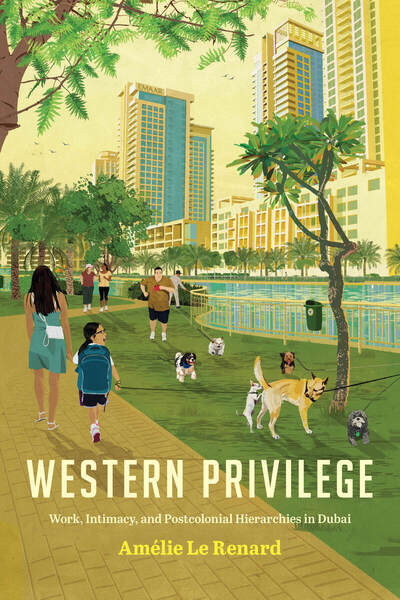 Nearly 90 percent of residents in Dubai are foreigners with no Emirati nationality. As in many global cities, those who hold Western passports share specific advantages: prestigious careers, high salaries, and comfortable homes and lifestyles. With this book, Amélie Le Renard explores how race, gender and class backgrounds shape experiences of privilege, and investigates the processes that lead to the formation of Westerners as a social group.

Westernness is more than a passport; it is also an identity that requires emotional and bodily labor. And as they work, hook up, parent, and hire domestic help, Westerners chase Dubai's promise of socioeconomic elevation for the few. Through an ethnography informed by postcolonial and feminist theory, Le Renard reveals the diverse experiences and trajectories of white and non-white, male and female Westerners to understand the shifting and contingent nature of Westernness—and also its deep connection to whiteness and heteronormativity. Western Privilege offers a singular look at the lived reality of structural racism in cities of the global South.

Amélie Le Renard is Permanent Researcher at the National Center for Scientific Research, Centre Maurice Halbwachs, Paris. She is the author of A Society of Young Women: Opportunities of Place, Power, and Reform in Saudi Arabia (Stanford, 2014).

"Western Privilege is a must-read for those interested in race and racialization anywhere. 'Western' and 'white' remain unmarked, static categories in most postcolonial scholarship. In this excellent ethnography, Amélie Le Renard shows ushow these structuring categories are both integral to Gulf social hierarchies and have an enduring global influence."

"Western Privilege provides a fascinating analysis of Dubai as a hub city of postcolonial globalization. Amélie Le Renard skillfully weaves together consideration of a complex range of issues, such as intersectionality and heteronormativity, to bring new insights to scholars of Arab studies and all who work on globalization and migration."

"Amélie Le Renard's portrait of professional workers in Dubai not only provides an intimate rendering of the workings of privilege, but shows why understanding it must foreground race (particularly whiteness), gender, and sexuality. Western Privilege is a rare intersectional analysis of privilege that is both empirically and theoretically rich."

"Western Privilegecontributes to a discussion about Western hegemony by showing how Westernness and whiteness organise social life in a non-Western context. Moreover, the use of a postcolonial feminist approach allows the author to provide insights into how Westernness is conditioned and shaped by gender, race and class. Besides its scholarly contributions, the book will hopefully prompt those who self-identify as Westerners in the Middle Eastern context to critically examine their own contributions to the social order in question."

"I applaud Le Renard for a rich and thorough investigation of class, gender, nationality, and race."