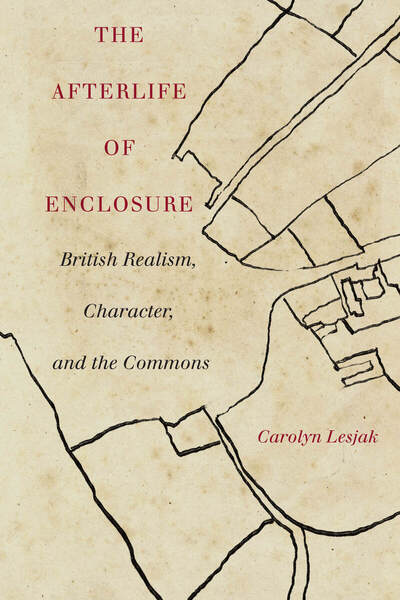 The Afterlife of Enclosure
British Realism, Character, and the Commons
Carolyn Lesjak

The enclosure of the commons, space once available for communal use, was not a singular event but an act of "slow violence" that transformed lands, labor, and basic concepts of public life leading into the nineteenth century. The Afterlife of Enclosure examines three canonical British writers—Charles Dickens, George Eliot, and Thomas Hardy—as narrators of this history, the long duration and diffuse effects of which required new literary forms to capture the lived experience of enclosure and its aftermath.

This study boldly reconceives the realist novel, not as an outdated artifact, but as witness to the material and environmental dispossession of enclosure—and bearer of utopian energies. These writers reinvented a commons committed to the collective nature of the social world. Illuminating the common at the heart of the novel—from common characters to commonplace events—Carolyn Lesjak reveals an experimental figuration of the lost commons, once a defining feature of the British landscape and political imaginary. In the face of privatization, climate change, new enclosures, and the other forms of slow violence unfolding globally today, this book looks back to a literature of historical trauma and locates within it a radical path forward.

Carolyn Lesjak is Associate Professor of English at Simon Fraser University. She is the author of Working Fictions: A Genealogy of the Victorian Novel (2006).

"Complex and subtle in theoretical approach, sensitive to the slow time of historical transformation, and written with great clarity and energy, this is a carefully researched book animated by a powerful and timely argument for the distinctive power of literature to capture experiences of the 'unenclosed' and to convey a sense of futural possibilities."

"Reconceiving enclosure as a form of slow violence akin to other forms of environmental dispossession, Carolyn Lesjak generates deep and entirely new readings of the Victorian realist novel. Her analysis approaches literature as a political resource for the ongoing struggle against neoliberalism's destruction of the commons."

"The Afterlife of Enclosure is a remarkable text that extends the ideas of Karl Marx, E. P. Thompson, and Raymond Williams in its timely understanding of enclosures as local phenomena with global reach and ultimate catalysts for contemporary catastrophes... [Lesjak's] monograph itself becomes a radical thought experiment, in line with popular forms of resistance, as Lesjak's investigation of 19th-century novels as material artefacts is transformed into a call to action for sociopolitical change."

—Sophia Möllers, Journal for the Study of British Cultures

"By illuminating how nineteenth-century realist fiction can serve as an atlas to our enclosed world, Lesjak provides a model of reading that is at once critical and reparative, deeply historical and attuned to the crises of the present."

The Baffler
Reading Realism Dialectically: A Forum on Carloyn Lesjak’s The Afterlife of Enclosure: British Realism, Character, and the Commons