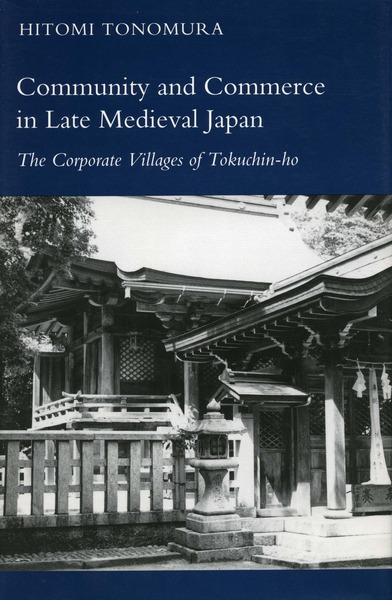 Late medieval Japan witnessed a growth in the power of the commoner, as seen in the spread of corporate villages (sō) marked by collective ownership and administration and other self-governing features. This study of a community of sō villages in central Japan from the fourteenth through the seventeenth centuries reconstructs the life of these villages by analyzing the rich and abundant communal records largely written by the villagers themselves and carefully preserved in the local shrine.

The author show how these villagers founded and operated a shrine-centered organization that brought coherence, order, and prestige to the community at the same time it formalized the differences among the residents along gender and class lines. The Tokuchin-ho sō was a governmental, social, and religious institution that facilitated the movement toward localism, but, the author argues, its growing collective power and organization also benefited its local proprietor, the great monastic complex of Enryakuji. Political and economic resources flowed vertically between the client-village and the patron-proprietor as they collaborated to secure internal peace and wide-reaching commercial interests.

The book traces the transformation of the sō as late medieval decentralization gave way to politically unified early modern society, with its enforced transfer of merchants from villages to towns, confiscation of shrine land, and the relinquishment of the sō's political authority. Despite these efforts, as a powerful organization experienced in promoting communal order, the sō was able to maintain its medieval legacy of self-determination, substantially preempting bureaucratic intervention in local governance.

The local records allow the author to study the sō from the villagers' perspective, and she presents new information on the position of women in rural communities, the local mode of economic surplus accumulation, the detailed social and economic functions of a shrine, and the reaction to nationwide cadastral surveys. The book is illustrated with 21 halftones.