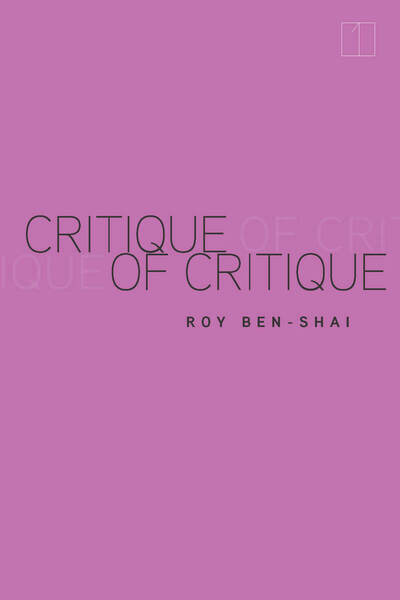 Critique of Critique
Roy Ben-Shai
SERIES: Square One: First-Order Questions in the Humanities

What is critique? How is it used and abused? At a moment when popular discourse is saturated with voices confronting each other about not being critical enough, while academic discourses proclaim to have moved past critique, this provocative book reawakens the foundational question of what 'critique' is in the first place. Roy Ben-Shai inspects critique as an orientation of critical thinking, probing its structures and assumptions, its limits and its risks, its history and its possibilities. The book is a journey through a landscape of ideas, images, and texts from diverse sources—theological, psychological, etymological, and artistic, but mainly across the history of philosophy, from Plato and Saint Augustine, through Kant and Hegel, Marx and Heidegger, up to contemporary critical theory.

Along the way, Ben-Shai invites the reader to examine their own orientation of thought, even at the moment of reading the book; to question popular discourse; and to revisit the philosophical canon, revealing affinities among often antagonistic traditions, such as Catholicism and Marxism. Most importantly, Critique of Critique sets the ground for an examination of alternative orientations of critical thinking, other ways of inhabiting and grasping the world.

"Ben-Shai exposes the rhizomatic orientations of critique, its multiple topologies, chronologies, positionalities, perversions and betrayals. A masterful analysis of where we are and what we are doing when we engage in critique."

"This is one hell of a book—a decisive intervention in the inheritance of the critical theory tradition. Political philosophers and political theorists will want to read this, as will everyone concerned with criticism in film and the arts today."

"What does it mean to orient ourselves critically rather than in some other way? In answering this question Ben-Shai brilliantly shows how to critically circumscribe the limits of critique."