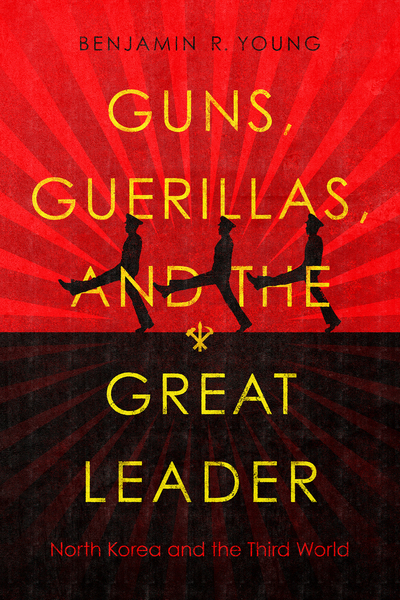 Far from always having been an isolated nation and a pariah state in the international community, North Korea exercised significant influence among Third World nations during the Cold War era. With one foot in the socialist Second World and the other in the anticolonial Third World, North Korea occupied a unique position as both a postcolonial nation and a Soviet client state, and sent advisors to assist African liberation movements, trained anti-imperialist guerilla fighters, and completed building projects in developing countries. State-run media coverage of events in the Third World shaped the worldview of many North Koreans and helped them imagine a unified anti-imperialist front that stretched from the boulevards of Pyongyang to the streets of the Gaza Strip and the beaches of Cuba.

This book tells the story of North Korea's transformation in the Third World from model developmental state to reckless terrorist nation, and how Pyongyang's actions, both in the Third World and on the Korean peninsula, ultimately backfired against the Kim family regime's foreign policy goals. Based on multinational and multi-archival research, this book examines the intersection of North Korea's domestic and foreign policies and the ways in which North Korea's developmental model appealed to the decolonizing world.

Benjamin R. Young is an Assistant Professor in Homeland Security & Emergency Preparedness at Virginia Commonwealth University. He has previously taught at Dakota State University and the U.S Naval War College. He received his PhD in 2018 from George Washington University and was also a member of the 2018-2019 CSIS NextGen Korea Scholars Program. His research primarily revolves around East Asian studies, Cold War international history, security studies, and international relations.

"By calling attention to relations with the Third World as a critical component of North Korea's developing national identity, Guns, Guerillas, and the Great Leader offers a significant and refreshing contribution to understanding the historical development of North Korea that moves beyond the familiar narrative of an emerging state situated amongst China and the Soviet Union in the Cold War context."

"North Korea has been an isolated nation since the 1990s, but interestingly Young points out odd relics of a time the so-called Hermit Kingdom reached out to the world, such as Kim Il Sung Avenue in Mozambique's capital Maputo. For the casual Korea watcher this book is a surprise: it shows the country's story hasn't been all bad."

"This is a serious work of history, not a light read, but it's really well researched. More importantly, it manages to say something new and interesting about North Korea, which frankly is rare. Young shows how North Korea was once extremely active in the Third World, building movements against western imperialism that today look militantly quixotic but at the time had revolutionary potential. The dense networks of exchange and patronage that North Korea forged, across the Third World but in Africa especially, added to its own sense of purpose and informed its vision of unification of the Korean Peninsula."

—Van Jackson, The Duck of Minerva

"Today, the Democratic People's Republic of Korea (DPRK), or North Korea, is widely viewed as a dangerous rogue state that is irrationally pursuing nuclear weapons despite international condemnation and the crushing poverty of its own people... Benjamin Young's Guns, Guerillas, and the Great Leader turns this picture on its head by taking the reader back to a time when North Korea was competing with the world's superpowers by presenting itself as an alternative model of development for Third World audiences."

"Guns, Guerrillas and the Great Leader rightly underlines the North as the Cold War success story. In the long post war liberation struggles and the aftermath with the sweet success of victory there were appreciations for solidarity and quests for new maps. The North had provided the first home and away."

"[Young's] monograph is a valuable contribution to North Korean, Cold War, and Third World studies, as it provides detailed factual information on Pyongyang's interactions with over twenty Third World states. Its colourful description of the heavy-handed methods of North Korean diplomacy makes it easier to understand why many non-aligned countries, having initially embraced the DPRK, soon became disillusioned with its behaviour. At the same time, the author also demonstrates that North Korea did manage to retain a foothold in certain developing countries even after a series of regime changes, precisely because of the same opportunistic pragmatism that repulsed some other Third World leaders."

"Guns, Guerillas, and the Great Leader is a gem among several new books on North Korean diplomacy and leadership. The book is also very accessible to a wider general audience. Despite the book's weighty subject matter, its title alludes to some of the fascinating anecdotes that fill its pages, thus making Young's first monograph a thoroughly enjoyable read."

"The book is fascinating as it sets out in readable form that inter-Korean legitimacy battle in the early decades of the two states, an era when literally any sovereign territorywith a vote in the UNbecame a sought-after target for both North and South, all the way down to small island chains in the waters of the Caribbean and Pacific."

"Young has written a compelling and thoughtful book on a subject that has received little attention until now. Given readers' seemingly inexhaustible curiosity about all things North Korea, this is no small feat for a first book. I look forward to reading what comes next."