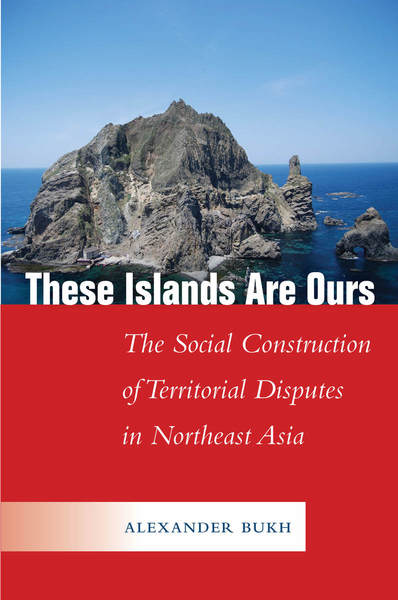 These Islands Are Ours
The Social Construction of Territorial Disputes in Northeast Asia
Alexander Bukh
SERIES: Studies in Asian Security

Territorial disputes are one of the main sources of tension in Northeast Asia. Escalation in such conflicts often stems from a widely shared public perception that the territory in question is of the utmost importance to the nation. While that's frequently not true in economic, military, or political terms, citizens' groups and other domestic actors throughout the region have mounted sustained campaigns to protect or recover disputed islands. Quite often, these campaigns have wide-ranging domestic and international consequences.

Why and how do territorial disputes that at one point mattered little, become salient? Focusing on non-state actors rather than political elites, Alexander Bukh explains how and why apparently inconsequential territories become central to national discourse in Japan, South Korea, and Taiwan. These Islands Are Ours challenges the conventional wisdom that disputes-related campaigns originate in the desire to protect national territory and traces their roots to times of crisis in the respective societies. This book gives us a new way to understand the nature of territorial disputes and how they inform national identities by exploring the processes of their social construction, and amplification.

Alexander Bukh is Senior Lecturer in International Relations at Victoria University of Wellington. He is the author of Japan's Identity and Foreign Policy: Russia as Japan's 'Other' (2009) and the producer and co-director of the documentary This Island Is Ours: Defending Dokdo/Retrieving Takeshima (2016).

"In this refreshing book, Alexander Bukh marshals an impressive range of evidence and marries it to a theoretically nuanced approach to say something new and original. These Islands Are Ours will appeal to a wide audience that wishes to understand the micro-level processes by which the competing narratives and identities around these disputes are constructed."

"In this valuable contribution to our understanding of territorial disputes in Asia, Alexander Bukh does an admirable job of drawing attention to the internal dynamics in Japan, South Korea, and Taiwan. This book will be of interest to IR and Asia specialists seeking to understand how 'national identity entrepreneurs' in domestic politics shape societal narratives of territorial disputes, and how also the shifting patterns of their entrepreneurship can be consequential in taking on and eliciting responses from the state in times of deep flux and beyond."

"Bukh's layering of evidence—whether newspaper articles, interviews, or other media—supports a 'thick description' of the shifting but ultimately meaningful construction of national narratives about identity and territory in Northeast Asia. It is a valuable contribution to the study of international relations in Asia, especially for showing how narratives about territorial disputes are semiotically deployed, interpreted, and transformed."

"For students with an interest in exploring new methods in East Asian area studies, These Islands is an example of interpretive research that cites a rich tapestry of sources, such as pamphlets, prefectural and government reports, petitions, newspapers, educational material, postcards, advertisements, and stamps... The book makes a valuable contribution to East Asian international relations."

These Islands Are Ours