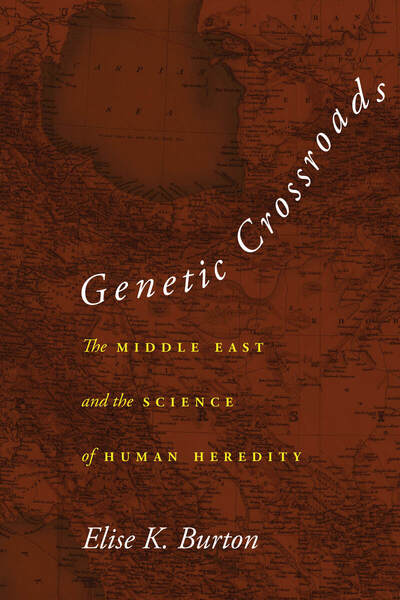 The Middle East plays a major role in the history of genetic science. Early in the twentieth century, technological breakthroughs in human genetics coincided with the birth of modern Middle Eastern nation-states, who proclaimed that the region's ancient history—as a cradle of civilizations and crossroads of humankind—was preserved in the bones and blood of their citizens. Using letters and publications from the 1920s to the present, Elise K. Burton follows the field expeditions and hospital surveys that scrutinized the bodies of tribal nomads and religious minorities. These studies, geneticists claim, not only detect the living descendants of biblical civilizations but also reveal the deeper past of human evolution.

Genetic Crossroads is an unprecedented history of human genetics in the Middle East, from its roots in colonial anthropology and medicine to recent genome sequencing projects. It illuminates how scientists from Turkey to Yemen, Egypt to Iran, transformed genetic data into territorial claims and national origin myths. Burton shows why such nationalist appropriations of genetics are not local or temporary aberrations, but rather the enduring foundations of international scientific interest in Middle Eastern populations to this day.

Elise K. Burton is Assistant Professor at the Institute for the History and Philosophy of Science and Technology, University of Toronto.

"Genetic Crossroads is a shining example of how to write multi-scalar, multi-sited, and multi-lingual histories of science. Few scholars are able to balance the contradictory pulls of the global and the local; Elise Burton shows how they can be effectively braided together without sacrificing critique, complexity, or context."

"Deeply researched and powerfully written, Genetic Crossroads is one of the most original books I have read in a decade. Burton's unique history of Middle Eastern genetics is a fascinating study of genetic nationalism and the global hierarchies of such scientific inquiry, and a must-read for historians of all fields."

"Drawing on sources in four Middle Eastern languages and from underused Western archives, Elise Burton explains why the Middle East was so pivotal for global genetics. Exemplifying how to integrate area studies and global history, Genetic Crossroads is a true tour de force."

"Genetic Crossroads exposes how technical and scientific projects about human ethnicity underpinned nationalist ideologies across the twentieth century. Burton introduces a novel angle to established debates, showing how scientific researchers nourished racial mythologies, and how those mythologies drove the researchers themselves. She draws disparate literatures into a single intervention, extending isolated national stories through her integrative original research. The book is remarkable for its breadth of coverage in time, space, and language; every reader will find something that engages their area of curiosity or expertise."

"Genetic Crossroads: The Middle East and the Science of Human Heredity by Elise Burton, is a sweeping history of 'genetic nationalism' in the 20th century covering Iran, Turkey, Israel, Lebanon, Egypt and other Arab countries."