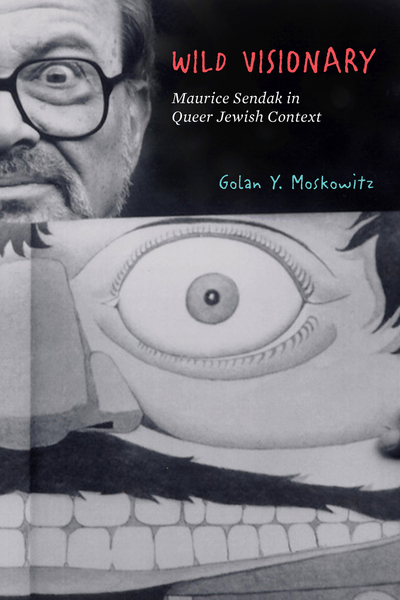 Wild Visionary reconsiders Maurice Sendak's life and work in the context of his experience as a Jewish gay man. Maurice (Moishe) Bernard Sendak (1928–2012) was a fierce, romantic, and shockingly funny truth seeker who intervened in modern literature and culture. Raising the stakes of children's books, Sendak painted childhood with the dark realism and wild imagination of his own sensitive "inner child," drawing on the queer and Yiddish sensibilities that shaped his singular voice.

Interweaving literary biography and cultural history, Golan Y. Moskowitz follows Sendak from his parents' Brooklyn home to spaces of creative growth and artistic vision—from neighborhood movie palaces to Hell's Kitchen, Greenwich Village, Fire Island, and the Connecticut country home he shared with Eugene Glynn, his partner of more than fifty years. Further, he analyzes Sendak's investment in the figure of the endangered child in symbolic relation to collective touchstones that impacted the artist's perspective—the Great Depression, the Holocaust, and the AIDS crisis. Through a deep exploration of Sendak's picture books, interviews, and previously unstudied personal correspondence, Wild Visionary offers a sensitive portrait of the most beloved and enchanting picture-book artist of our time.

"Golan Y. Moskowitz's thorough study of Maurice Sendak's life and work unveils the struggles that led him to 'queer' his children's books. Moskowitz captures the essential forces behind his artwork, showing how Sendak was just as politically radical as he was emotionally provocative."

"Easily the best study of Sendak to appear; deeply researched and utterly engaging. Moskowitz brings rich new context to Sendak's life, showing how the artist's historically sidelined queer and Jewish identity inspired his work. Even the notoriously cranky Sendak would have liked it."

"This revelatory exploration of Maurice Sendak's life opens up vistas not only on creativity, queerness, and the Jewish-American immigrant experience but also, and most powerfully, on childhood. Moskowitz is a deft guide to the wild places of Sendak's imagination, where generations of children recognized something startling and true about themselves."

"Moskowitz has reclaimed Sendak as one of great gay writers and artists of the 20th century... Astutely analyzing drafts of Sendak's narratives, and the progressive stages of his illustrations, Moskowitz demonstrates the sometimes subtle, but often quite overt, ways in which Sendak blurred gender lines and celebrates queer relationships."

"InWild Visionary, Moskowitz presents a sensitive and discerning depiction of the life and work of Maurice Sendak, and the ways in which his story offers insights into broader tensions: between what children, and people more generally, see and need, and what the world thinks they see and need; between the worlds of cultural production and the various, often unseen forces that manage both to stifle and reward freedom and creativity."

—Tahneer Oksman, In Geveb: A Journal of Yiddish Studies

"This evocative...book captures Sendak's commitment to radical honesty from the inside out and challenges us to follow the threads of Jewishness, queerness, and other diversities of identity as they have shaped, and continue to shape, art and life and everything in between In Sendak's words, let the wild rumpus begin!"

"Moskowitz persuasively grounds Sendak's creative output in his Jewish and queer identities, offering important insights into the links between sexual, ethnic, and cultural experiences of difference, the universal queerness of childhood, and the ways in which intergenerational trauma informs Jewish and immigrant identities in American culture."