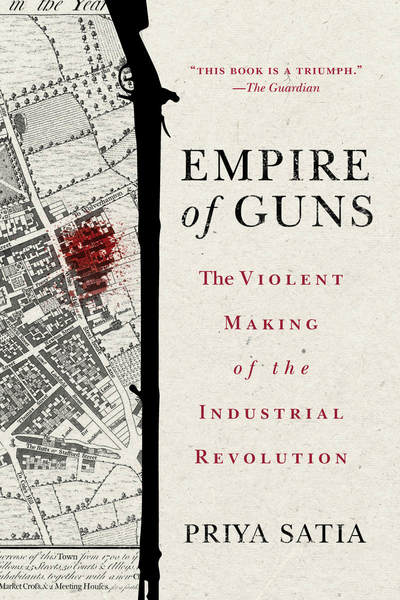 Winner of the 2019 Jerry Bentley Prize, sponsored by the American Historical Association.

Winner of the 2019 Wadsworth Prize, sponsored by the Business Archives Council.

A rich and ambitious history reframing the Industrial Revolution, the expansion of the British empire, and the emergence of industrial capitalism as inextricable from the gun trade.

From the seventeenth to the nineteenth century, the industrial revolution transformed Britain from an agricultural and artisanal economy to one dominated by industry, ushering in unprecedented growth in technology and trade and putting the country at the center of the global economy. But the commonly accepted story of the industrial revolution, anchored in images of cotton factories and steam engines invented by unfettered geniuses, overlooks the true root of economic and industrial expansion: the lucrative military contracting that enabled the country's near-constant state of war in the eighteenth century. Demand for the guns and other war materiel that allowed British armies, navies, mercenaries, traders, settlers, and adventurers to conquer an immense share of the globe in turn drove the rise of innumerable associated industries, from metalworking to banking.

Bookended by the Glorious Revolution of 1688 and the end of the Napoleonic Wars in 1815, this book traces the social and material life of British guns over a century of near-constant war and violence at home and abroad. Priya Satia develops this story through the life of prominent British gun-maker and Quaker Samuel Galton Jr., who was asked to answer for the moral defensibility of producing guns as new uses like anonymous mass violence rose. Reconciling the pacifist tenet of his faith with his perception of the economic realities of the time, Galton argued that war was driving the industrial economy, making everyone inescapably complicit in it. Through his story, Satia illuminates Britain's emergence as a global superpower, the roots of the government's role in economic development, and the origins of our own era's debates over gun control and military contracting.

Priya Satia is the Raymond A. Spruance Professor of International History and Professor of British History at Stanford University. She is the author of Spies in Arabia: The Great War and the Cultural Foundations of Britain's Covert Empire in the Middle East (2009), and her writing has appeared in Slate, the Financial Times, the Nation, and the Huffington Post, among other publications.

"Satia's detailed retelling of the Industrial Revolution and Britain's relentless empire expansion notably contradicts simple free market narratives. . . . She argues convincingly that the expansion of the armaments industry and the government's role in it is inseparable from the rise of innumerable associated industries from finance to mining. . . . Fascinating."

"A fascinating study of the centrality of militarism in 18th-century British life, and how imperial expansion and arms went hand in hand. This book is a triumph."

"Satia marshals an overwhelming amount of evidence to show, comprehensively, that guns had a place at the center of every conventional tale historians have so far told about the origins of the modern, industrialized world. . . . Though not presented as a political book, the implications of Satia's work are difficult to ignore."

"Sweeping and stimulating....An extensively researched and carefully crafted narrative. . . . This important book helps us to look at British and United States history in an unconventional way and makes for great reading."

"A solid contribution to the history of technology and commerce, with broad implications for the present."

"Empire of Guns offers a sweeping revision of the history of the origins of the industrial revolution and the nature of capitalism itself."

"A fascinating and important glimpse into how violence fueled the industrial revolution, Priya Satia's book stuns with deep scholarship and sparkling prose."

—Siddhartha Mukherjee, Pulitzer Prize–winning author of The Emperor of All Maladies

"Empire of Guns is a richly researched and probing historical narrative that challenges our understanding of the engines that drove Britain's industrial revolution. With this book, Priya Satia introduces Samuel Galton and the economies of guns and war into the historical equation and, with it, affirms her place as a deeply captivating and thought-provoking historian."

—Caroline Elkins, winner of the Pulitzer Prize for Imperial Reckoning

"Empire of Guns is an important revisionist account of the industrial revolution, reminding us that the making of the modern state and the making of modern capitalism were tightly intertwined. A revelatory book."

—Sven Beckert, finalist for the Pulitzer Prize for Empire of Cotton

"Empire of Guns boldly uncovers a history of modern violence and its central role in political, economic, and technological progress. As unsettling as it is bracing, it radically deepens our understanding of the 'iron cage' of modernity."

"A strong narrative bolstered by excellent archival research. . . . Tremendous scholarship. . . . Satia's detailed and fresh look at the Industrial Revolution has appeal and relevance grounded in and reaching beyond history and social science to illuminate the complexity of present-day gun-control debates."

"Satia moves confidently back and forth between economic and cultural history and writes with equal confidence about several continents...Satia engages social-scientific theory successfully, marshaling a broad range of evidence to challenge conventional thinking."––William K. Storey, Technology and Culture

"Satia does not displace the well-grounded depiction of industrialization based in textiles and railroads; rather, she convincingly supplements it, demonstrating the equal significance of the heretofore overlooked role of the military requirements of empire. This book, written in sparkling prose, is a potentially paradigm-changing work. Highly recommended."

"It is impossible to do justice to such a comprehensive and thought-provoking book that will appeal to general readers and scholars alike. . . . The influence of Empire of Guns on the scholarship of industrialization is sure to rival that of the firearms' on global capitalism."

"Empire of Guns is an important book with a compelling thesis about the warfare state's role in prompting the Industrial Revolution....[A] first-rate study that deserves a wide readership."

"This work is to be applauded not only for emphasizing violence as a key component of the industrial revolution, but also because it does so through meticulous, in-depth archival research that supports the whole narrative....required reading for all those who are politically and intellectually interested in identifying the material and social conditions in which modern gun-making emerged and ushered in the triumph of liberalism and capitalism in the world."

More in History—Science, Technology, and Medicine