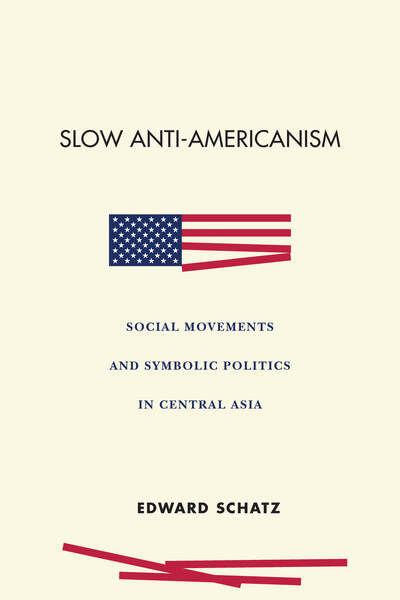 Negative views of the United States abound, but we know too little about how such views affect politics. Drawing on careful research on post-Soviet Central Asia, Edward Schatz argues that anti-Americanism is best seen not as a rising tide that swamps or as a conflagration that overwhelms. Rather, "America" is a symbolic resource that resides quietly in the mundane but always has potential value for social and political mobilizers. Using a wide range of evidence and a novel analytic framework, Schatz considers how Islamist movements, human rights activists, and labor mobilizers across Central Asia avail themselves of this fact, thus changing their ability to pursue their respective agendas. By refocusing our analytic gaze away from high politics, he affords us a clearer view of the slower-moving, partially occluded, and socially embedded processes that ground how "America" becomes political. In turn, we gain a nuanced appreciation of the downstream effects of US foreign policy choices and a sober sense of the challenges posed by the politics of traveling images.

Most treatments of anti-Americanism focus on politics in the realm of presidential elections and foreign policies. By focusing instead on symbols, Schatz lays bare how changing public attitudes shift social relations in politically significant ways, and considers how changing symbolic depictions of the United States recombine the raw material available for social mobilizers. Just like sediment traveling along waterways before reaching its final destination, the raw material that constitutes symbolic America can travel among various social groups, and can settle into place to form the basis of new social meanings. Symbolic America, Schatz shows us, matters for politics in Central Asia and beyond.

Edward Schatz is Associate Professor of Political Science at the University of Toronto. His previous books include Paradox of Power: The Logics of State Weakness in Eurasia (2017) and Political Ethnography: What Immersion Contributes to the Study of Power (2009).

"Fresh, strikingly original, and with the wisdom of the long view, Slow Anti-Americanism compellingly shows the slow-burning complexities of anti-Americanism. Edward Schatz's careful observations offer critical guidance to scholars and policymakers about what America stands for in Central Asia and beyond."

"Relying on geological metaphors and the analysis of symbolic politics, Edward Schatz offers a theoretically nuanced and empirically innovative study of anti-Americanism in Central Asia. Slow Anti-Americanism is a valuable addition to a literature that is, once again, of growing importance in the analysis of U.S. foreign policy and world politics."

"Edward Schatz looks at how negative perceptions of America conditioned the long-term success or failure of domestic political movements abroad. Turning the topic inside out on the strategic terrain of central Asia, this brilliant book heralds a paradigm shift in the study of public diplomacy. It deserves a large audience."

"Those interested in reflecting on the recent history of America's reputation abroad and what should be done differently in the future will want to readSlow Anti-Americanism... It takes readers far from the headspace of the foreign policy community and into the lives of activists and ordinary people in a part of the world where the reputation of the United States has changed greatly over the last 30 years." –Laura Adams, the Oxus Society for Central Asian Affairs

"Whereas scholars have tended to view anti-Americanism as either a psychological or a cultural 'clash of civilizations' phenomenon, Edward Schatz looks at how negative perceptions of America conditioned the long-term success or failure of domestic political movements abroad. Turning the topic inside out on the strategic terrain of central Asia, this brilliant book heralds a paradigm shift in the study of public diplomacy. It deserves a large audience."