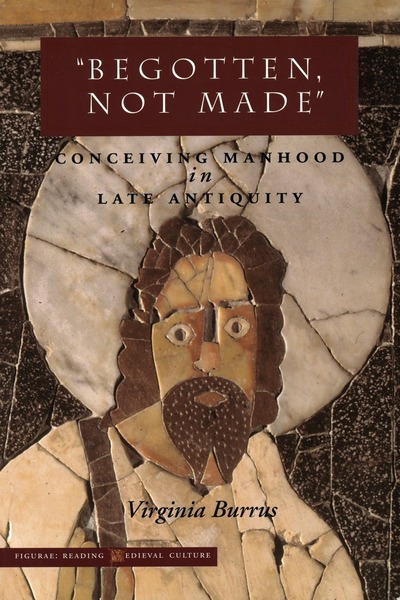 This book interprets fourth-century theological discourse as an incident in the history of masculine gender, arguing that Nicene trinitarian doctrine is a crucial site not only for theological innovation but also for reimagining and reproducing manhood in the late Roman period. When the Trinity became for the first time the sine qua non of doctrinal orthodoxy, masculinity was conceived anew, in terms that heightened the claims of patriarchal authority while cutting manhood loose from its traditional fleshly and familial moorings.

In exploring the significance of this late antique movement for the subsequent history of ideals of manhood in the West, this study directly engages, combines, and thereby disrupts the divergent disciplinary perspectives of historical theology, late Roman cultural history, and French feminist theory. The author brings contemporary theorist Luce Irigaray into dialogue with the Patristic corpus to coax out a fresh interpretation of ancient texts and themes.

The book centers on performative readings of major works by three prominent fourth-century Fathers—Athanasius of Alexandria, Gregory of Nyssa, and Ambrose of Milan. Each of these ascetic bishops played a crucial role in defending Nicene trinitarian doctrine as the touchstone of orthodox belief; each also modeled a distinctive style of fourth-century masculine self-fashioning. The concluding chapter considers the sum of these three figures from an explicitly feminist theological and theoretical perspective.

Virginia Burrus is Associate Professor of Early Church History at Drew University. She is the author, most recently, of The Making of a Heretic: Gender, Authority, and the Priscillianist Controversy.

"The book is an inspiring and unique work, a 'must read' for people with scholarly interest in patrisics and doctrinal theology as well as men's studies and queer studies."

"This is writing with verve and humour. Burrus's claims will be argued for years to come . . . and will open new avenues of exploration for the next generation of scholars."

"Burrus produces a scintillating study in patristic theology, combining a profound scholarly understanding of the patristic tradition with a daring appropriation of feminist psycholinguistic theory."