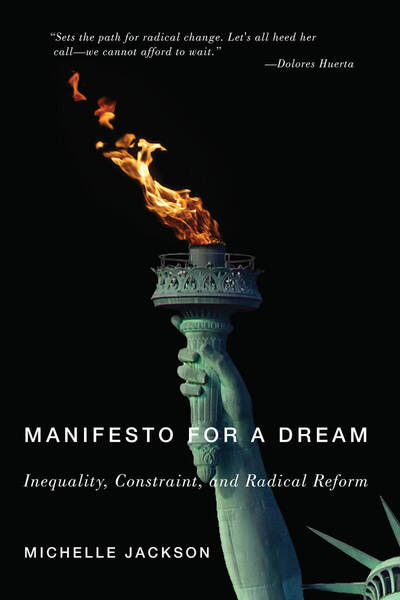 A searing critique of our contemporary policy agenda, and a call to implement radical change.

Although it is well known that the United States has an inequality problem, the social science community has failed to mobilize in response. Social scientists have instead adopted a strikingly insipid approach to policy reform, an ostensibly science-based approach that offers incremental, narrow-gauge, and evidence-informed "interventions." This approach assumes that the best that we can do is to contain the problem. It is largely taken for granted that we will never solve it. In Manifesto for a Dream, Michelle Jackson asserts that we will never make strides toward equality if we do not start to think radically. It is the structure of social institutions that generates and maintains social inequality, and it is only by attacking that structure that progress can be made. Jackson makes a scientific case for large-scale institutional reform, drawing on examples from other countries to demonstrate that reforms that have been unthinkable in the United States are considered to be quite unproblematic in other contexts. She persuasively argues that an emboldened social science has an obligation to develop and test the radical policies that would be necessary for equality to be assured for all.

Michelle Jackson is Assistant Professor of Sociology at Stanford University. She is the editor of Determined to Succeed? (SUP, 2013).

"Jackson urges scientists to step up and build visions of change that support communities in their fight for justice. She sets the path for radical change that is attainable to save our society from further deterioration—and to realize the Dream of equality on which our government was founded. Change requires all of us—including academics. Let's all heed her call—we cannot afford to wait."

"Should we bind the fates of rich and poor children together, so that if one rises or falls, the other does too? Should we outlaw practices that generate inequality? Should education be reserved for the first two decades of life or should we promote lifelong learning? These are some of the questions Michelle Jackson raises in this thought-provoking book. Manifesto for a Dream dispenses with tinkering around the edges to advocate for a social science that embraces radical reforms to reduce inequality. This is a book to wrestle with."

"A searing analysis and reckoning with what it will take to ensure the 'dream' extends to those who have been so long denied it. An exceptionally creative and hopeful vision for what America could become. Now is the time to embrace this bold vision."

"Grounded in justice, this book provides an essential critique and call to arms for the academy, and social scientists, in particular, to alter our ways of facilitating the status-quo of growing inequality, and, instead, to more directly promote radical reform to a system that has generated institutions that serve the elite and constraint the rest. I applaud Michelle Jackson for setting an example and providing a blueprint for anyone who wants to understand the necessary role of academics for an authentic solution to unjust inequality."

"[Manifesto for a Dream] invites readers to rethink the limited and isolated social proposals present today, and to generate large-scale policy interventions to address the larger, more complex, interconnected network of advantage and disadvantage that unfairly limits access to societal resources. Recommended."