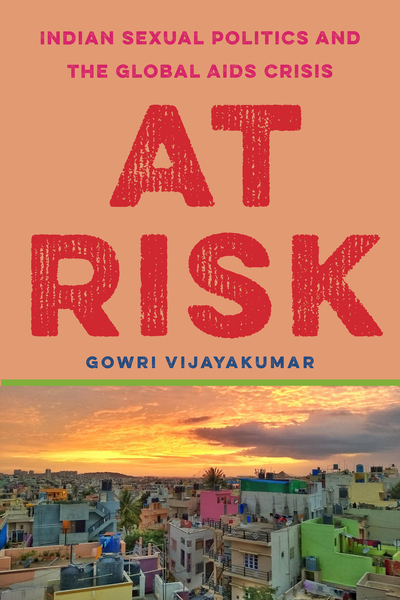 Winner of the 2022 Outstanding Book Award, sponsored by the Society for the Study of Social Problems (SSSP) - Global Division.

In the mid-1990s, experts predicted that India would face the world's biggest AIDS epidemic by 2000. Though a crisis at this scale never fully materialized, global public health institutions, donors, and the Indian state initiated a massive effort to prevent it. HIV prevention programs channeled billions of dollars toward those groups designated as at-risk—sex workers and men who have sex with men. At Risk captures this unique moment in which these criminalized and marginalized groups reinvented their "at-risk" categorization and became central players in the crisis response. The AIDS crisis created a contradictory, conditional, and temporary opening for sex-worker and LGBTIQ activists to renegotiate citizenship and to make demands on the state.

Working across India and Kenya, Gowri Vijayakumar provides a fine-grained account of the political struggles at the heart of the Indian AIDS response. These range from everyday articulations of sexual identity in activist organizations in Bangalore to new approaches to HIV prevention in Nairobi, where prevention strategies first introduced in India are adapted and circulate, as in the global AIDS field more broadly. Vijayakumar illuminates how the politics of gender, sexuality, and nationalism shape global crisis response. In so doing, she considers the precarious potential for social change in and after a crisis.

Gowri Vijayakumar is Assistant Professor of Sociology and Women's, Gender, and Sexuality Studies at Brandeis University.

"At Risk is feminist transnational sociology at its best! Meticulously researched and beautifully written, this book tells a richly textured, and often surprising, story about how Indian sex workers and LGBTQ people impacted the terrains of sexual politics amidst the AIDS crisis. Vijayakumar deftly illuminates what the global South has to teach us about sexual epidemics, activism, and the transformation of sexual cultures."

"At Risk offers the near-historical, ethnographic critique of sexuality politics and the HIV/AIDS crisis in India that we need. Vijayakumar shows in rich detail how 'ideas of sexuality are the "fulcrum" for constructing difference around race, caste, gender, and class,' in part by seriously examining the transnational linkages between Indian and African sex workers' rights movements during the 1990s and 2000s. This book is a critique of a moment that is critical for understanding a uniquely global health crisis, and what it revealed about the idea of 'India' in a uniquely changing world."