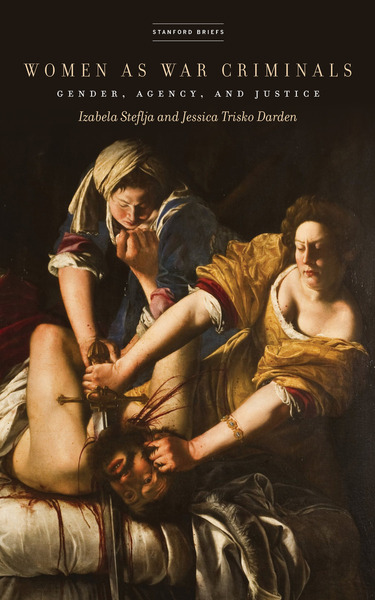 Women war criminals are far more common than we think. From the Holocaust to ethnic cleansing in the Balkans to the Rwandan genocide, women have perpetrated heinous crimes. Few have been punished. These women go unnoticed because their very existence challenges our assumptions about war and about women. Biases about women as peaceful and innocent prevent us from "seeing" women as war criminals—and prevent postconflict justice systems from assigning women blame.

Women as War Criminals argues that women are just as capable as men of committing war crimes and crimes against humanity. In addition to unsettling assumptions about women as agents of peace and reconciliation, the book highlights the gendered dynamics of law, and demonstrates that women are adept at using gender instrumentally to fight for better conditions and reduced sentences when war ends.

The book presents the legal cases of four women: the President (Biljana Plavšić), the Minister (Pauline Nyiramasuhuko), the Soldier (Lynndie England), and the Student (Hoda Muthana). Each woman's complex identity influenced her treatment by legal systems and her ability to mount a gendered defense before the court. Justice, as Steflja and Trisko Darden show, is not blind to gender.

Izabela Steflja is Professor of Practice in Political Science and International Development at Tulane University.

Jessica Trisko Darden is Assistant Professor of International Affairs at American University's School of International Service. She is the author of Aiding and Abetting: U.S. Foreign Assistance and State Violence (2019).

"Feminists don't imagine all women are angels. What they do know is that diverse women are analytically interesting. In their careful dig into these four war crimes trials, Izabela Steflja and Jessica Trisko Darden underscore this in neon."

"Women commit atrocities. The study of women who become human rights abusers, however, remains fraught with stereotype, taboo, and denialism. These distortions occlude the careful study of gender and violence and, what is more, marginalize the victims. Izabela Steflja and Jessica Trisko Darden's courageous book responds to these gaps by providing a humanistic, grounded, and rigorous study of four women enmeshed in criminality. Justice for atrocity hinges upon recognizing gender in all aspects—perpetration, suffering, and rebuilding. Women as War Criminals brilliantly advances the accountability project."

"Through a profile of four women war criminals, this concise book shines a spotlight on women who perpetrate or incite heinous acts of violence and on the ways in which gender stereotypes influence the interpretation of their behavior. Bold and clear, Women as War Criminals stands as a crucial corrective to assumptions about women in war and as an accessible analysis from which students and experts alike will learn."

War on the Rocks
Conflicts of Interest: Women as War Criminals