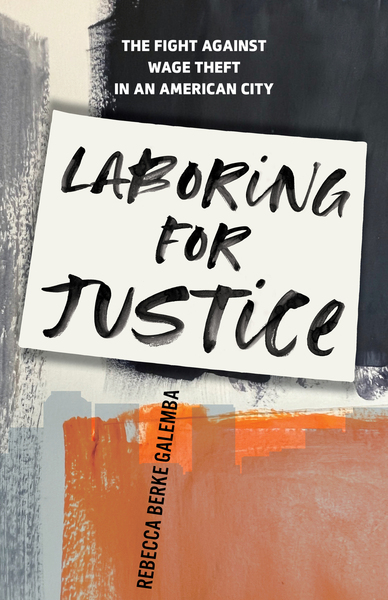 Laboring for Justice highlights the experiences of day laborers and advocates in the struggle against wage theft in Denver, Colorado.

Drawing on more than seven years of research that earned special recognition for its community engagement, this book analyzes the widespread problem of wage theft and its disproportionate impact on low-wage immigrant workers. Rebecca Galemba focuses on the plight of day laborers in Denver, Colorado—a quintessential purple state that has swung between some of the harshest and more welcoming policies around immigrant and labor rights. With collaborators and community partners, Galemba reveals how labor abuses like wage theft persist, and how advocates, attorneys, and workers struggle to redress and prevent those abuses using proactive policy, legal challenges, and direct action tactics. As more and more industries move away from secure, permanent employment and towards casualized labor practices, this book shines a light on wage theft as symptomatic of larger, systemic issues throughout the U.S. economy, and illustrates how workers can deploy effective strategies to endure and improve their position in the world amidst precarity through everyday forms of convivencia and resistance.

Applying a public anthropology approach that integrates the experiences of community partners, students, policy makers, and activists in the production of research, this book uses the pressing issue of wage theft to offer a methodologically rigorous, community-engaged, and pedagogically innovative approach to the study of immigration, labor, inequality, and social justice.

Rebecca Berke Galemba is Associate Professor at the Josef Korbel School of International Studies at the University of Denver. She received the 2022 Setha M. Low Engaged Anthropology Award from the American Anthropological Association for the Just Wages Project, focused on wage theft research and labor justice advocacy. She is the author of Contraband Corridor: Making a Living at the Mexico-Guatemala Border (Stanford, 2017).

"Laboring for Justice is public anthropology at its best! Galemba not only explores labor abuses through an engaged commitment to social justice and research, she also writes as a team player set on helping migrants deal with wage theft. Her community-based approach blurs the lines between activism, teaching, and anthropology and offers methodologically rich contributions to issues affecting migrant communities throughout the country."

—Juan Thomas Ordóñez, author of Jornalero: Being a Day Laborer in Northern California

"Professor Galemba's book does a better job of any other of telling the real human story of wage theft, how it affects people and families, in particular immigrants and people of color, how it strains our bureaucracy, how it undermines our marketplace. Wage theft is more than just a statistic. This book tells the story. "

"The product of a decade-long commitment to politically engaged research, Laboring for Justice makes visible the complex systems of power that constrain the lives and livelihoods of undocumented laborers across the United States. Galemba and colleagues' deeply reflexive consideration of their methodology of convivir is a gift to all committed to the decolonization of ethnographic research and writing."

—Angela Stuesse, author of Scratching Out a Living: Latinos, Race, and Work in the Deep South