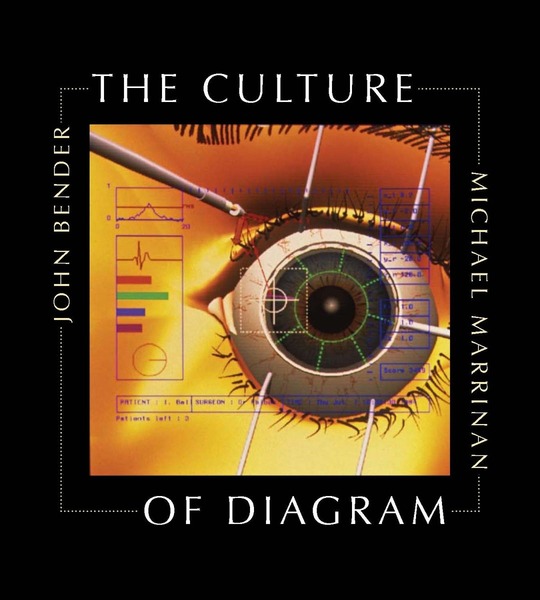 The Culture of Diagram
John Bender and Michael Marrinan

The Culture of Diagram is about visual thinking. Exploring a terrain where words meet pictures and formulas meet figures, the book foregrounds diagrams as tools for blurring those boundaries to focus on the production of knowledge as process. It outlines a history of convergence among diverse streams of data in real-time: from eighteenth-century print media and the diagrammatic procedures in the pages of Diderot's Encyclopedia to the paintings of Jacques-Louis David and mathematical devices that reveal the unseen worlds of quantum physics. Central to the story is the process of correlation, which invites observers to participate by eliciting leaps of imagination to fill gaps in data, equations, or sensations. This book traces practices that ran against the grain of both Locke's clear and distinct ideas and Newton's causality—practices greatly expanded by the calculus, probabilities, and protocols of data sampling.

Today's digital technologies are rooted in the ability of high-speed computers to correct errors when returning binary data to the human sensorium. High-tech diagrams echo the visual structures of the Encyclopedia, arraying packets of dissimilar data across digital spaces instead of white paper. The culture of diagram broke with the certainties of eighteenth-century science to expand the range of human experience. Speaking across disciplines and discourses, Bender and Marrinan situate our modernity in a new and revealing light.

John Bender is Jean G. and Morris M. Doyle Professor in Interdisciplinary Studies at Stanford University and a former Director of the Stanford Humanities Center (2001-2008). He is the author of Spenser and Literary Pictorialism and the prizewinning Imagining the Penitentiary: Fiction and the Architecture of Mind in Eighteenth-Century England.

Michael Marrinan is Professor of Art History in the Department of Art & Art History at Stanford University. His writings include Romantic Paris: Histories of a Cultural Landscape 1800–1850 (Stanford 2009) and Painting Politics for Louis-Philippe: Art and Ideology in Orléanist France, 1830–1848.

"This is a genealogy, not a history, of visual correlation as a form of knowledge. As such, the book becomes a powerful instance of the diagrammatic practice it describes. Like David's Oath of the Horatii, it is structured as a multiple-part space, with tightly argued sections separated by ample "whiteness" to enable manifold correlations to be made by the user. The authors admirably follow Diderot's practice in trusting the synthetic faculties of their audience, ensuring rich rewards for readers who take up their invitation."

"Displaying extraordinary erudition in many different fields, the authors performatively duplicate the method of rapports (correlations) across disciplines that they see as the special genius of diagrams themselves . . . The Culture of Diagram is a wonderfully stimulating, provocative, original achievement, lavishly illustrated with many examples that reinforce its argument."

"Ranging from the 19th century to the present, Bender and Marrinan's topics go beyond, and often integrate, the sciences and the arts, as the authors read diagrammatic knowledge into prints and oil paintings and thread statistics and probability theory through the social sciences, human vision theory, and into modern physics . . . Recommended."

"The Culture of Diagram is a well-crafted book. Its originality resides in the authors' capacity to recognize a running theme from the eighteenth century to the present in the history of representation in different domains such as painting, illustration, literature, aesthetics, theater and science, and in establishing key connections between ideas . . . this book creates a renewed ground for reflection."

—Norberto Serpente, British Journal of the History of Science

"John Bender and Michael Marrinan's The Culture of Diagram is sumptuously produced and printed."

"In what its authors call an 'archaeology of diagram,' this surprising and intelligent book offers a radical reinterpretation of the processes through which modern vision emerged. Taking as its principal topic the remarkable plates of the Encyclopédie of Diderot and d'Alembert, the analysis shows convincingly that these were working objects artfully designed to offer their users many different pathways and opportunities for making sense of their world. Against traditions that stress the classical power of singular perspective and the analytic gaze, the book urges that it was the startling and often disturbing juxtaposition of heterogeneous components, of description, delineation, and text, that allowed for and eventually compelled the possibility of simultaneous but conflicted patterns of vision and sense. In fascinating essays on the criticism of Diderot, the artworks of David, and the projective geometry of Monge, the authors reveal the ways in which this mixed mode of diagram played a crucial role in the many transformations of late eighteenth and early nineteenth-century sciences and arts. Concluding discussions carry the narrative through the probabilistic physics and the photographic iconography of nineteenth-century culture to the reorganization of vision and experience involved in the establishment of quantum theory and associated innovations of high modernity. This impressive and well-illustrated work will be of indispensable significance to historians of science and of art, to cultural critics and literary scholars alike."

"The Culture of Diagram offers a bracingly innovative and insightful critical genealogy of "diagrammatic knowledge" of the past 250 years. Tracing fractures in the classical scheme of representation whose consequences continue to play themselves out in the diagrammatic culture of our techno-modernity, Bender and Marrinan analyze with theoretical sophistication and clarity a non-experiential mode of understanding located in the diagram.The Culture of Diagram represents interdisciplinary thinking at its path-breaking best. Bringing together art history and visual studies, cultural and intellectual history, and science studies, Bender and Marrinan establish critically fresh and compelling insights in the disciplines from which they draw their material. They have produced an important book that will spark considerable and ongoing discussion in a number of fields."

"The diagram, forgotten third in the triad writing–image–diagram, is entirely reimagined in this book. For the authors, a diagram is an 'amalgam,' 'rife with internal discontinuities' and 'heterogeneous details,' 'ruptured by shifts in scale, focus, or resolution.' Diagrams, they assert, 'splinter description' and demand 'an active correlation of information.' Indeed they respond to our 'correlative understanding' and so work differently than writing or images. Diagrams are 'things to work with' as much as representations. This is a fundamentally postromantic and postmodern reading, following Starobinski more than Foucault, moving from the Encyclopédie to photography. It liberates studies of the forgotten third. In this sense this book is part of the great emerging project of theorizing how images model thought outside of linguistic analogies, naturalism, surrealism, and aesthetics."

—James Elkins, School of the Art Institute of Chicago 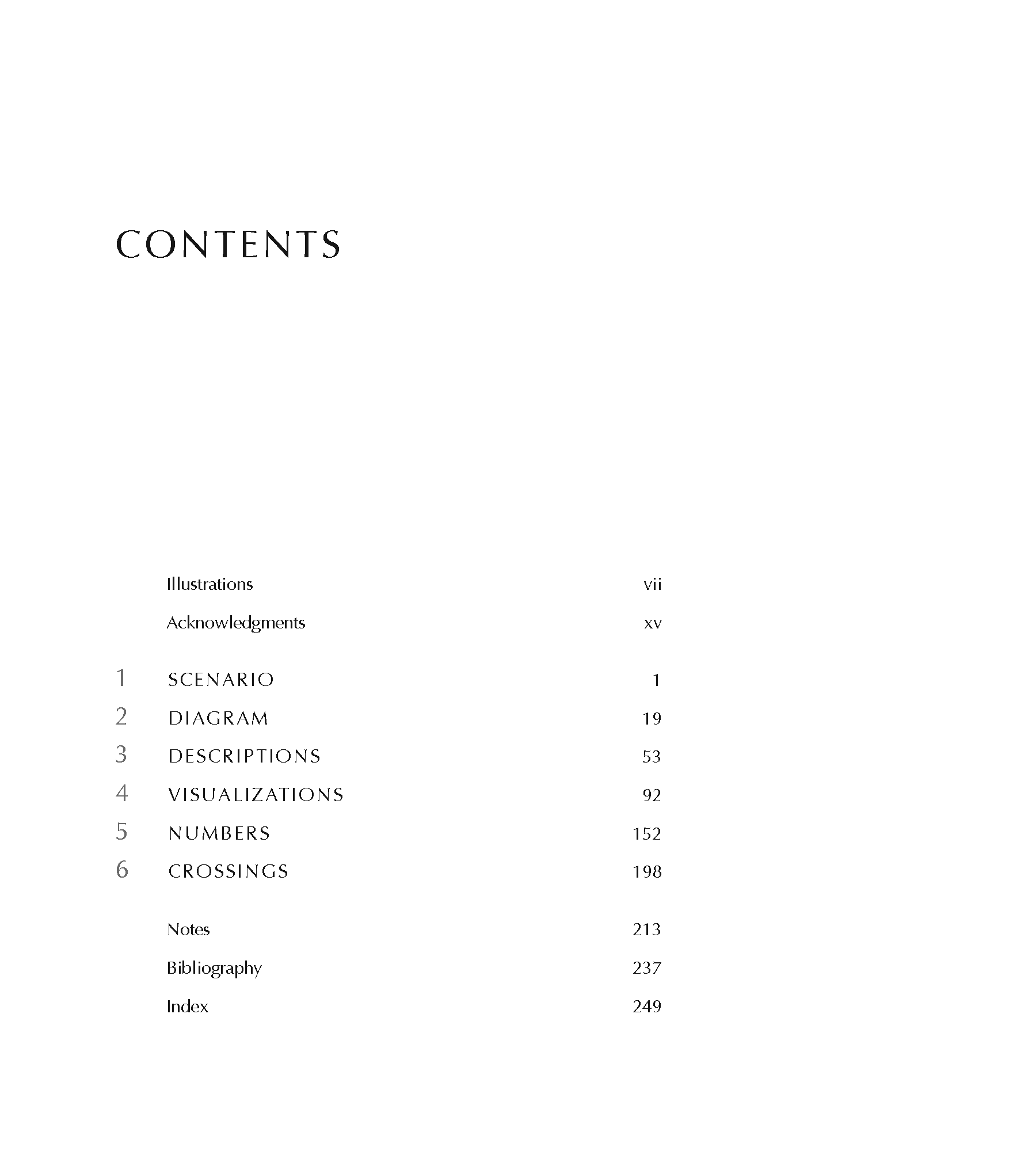