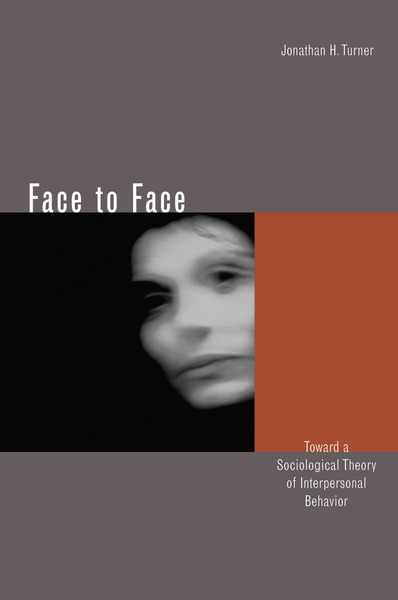 Face to Face
Toward a Sociological Theory of Interpersonal Behavior
Jonathan H. Turner

What are the processes and mechanisms involved in interpersonal behavior, and how are these constrained by human biology, social structure, and culture? Drawing on and updating classic sociological theory, and with special reference to the most recent research in evolutionary and neurophysiological theory, this ambitious work aims to present no less than a unified, general theory of what happens when people interact.

Despite modern technologies that mediate communication among individuals, face-to-face interaction is still primal and primary. This book argues against recent social theory that postulates a dramatic change in the nature of human relationships under postmodernity and, instead, asserts that despite undeniable and accelerating change in people’s environments, certain basic human tendencies toward emotionally inflected, physically present social interaction remain strong.

Turner builds on first principles he locates in the work of Mead, Freud, Schutz, Durkheim, and Goffman. After brief overviews of previous work on the embeddedness of social interaction in sociocultural systems and in human biology, each chapter presents elements of the microdynamics involved in encounters: emotions, motivations (transactional needs), culture (normative conventions), role processes, status, demographics, and ecology. Each chapter ends with a series of testable propositions, which are then streamlined into a series of summary principles intended to motivate future research. The book concludes with some cautious hypotheses on the potential influence of microprocesses on broader social dynamics.

Jonathan H. Turner is Distinguished Professor of Sociology at the University of California, Riverside. Among his many books are On the Origins of Human Emotions: A Sociological Inquiry into the Evolution of Human Affect (Stanford, 2000) and A Theory of Social Interaction (Stanford, 1988)

"The heart of this book is an admirable summary of work done on interpersonal relations over the last century in sociology. There is not a better work available to encapsulate the positions of theorists like Mead, Schutz, Freud, Durkheim, and Goffman, or to frame the basic issues in the field, such as emotional, role, status, and ecological forces in face to face interaction."

"...Turner has succeeded admirably in pulling together diverse strains of sociological reasoning into a coherent and integrated theoretical framework."

—Canadian Review of Sociology and Anthropology