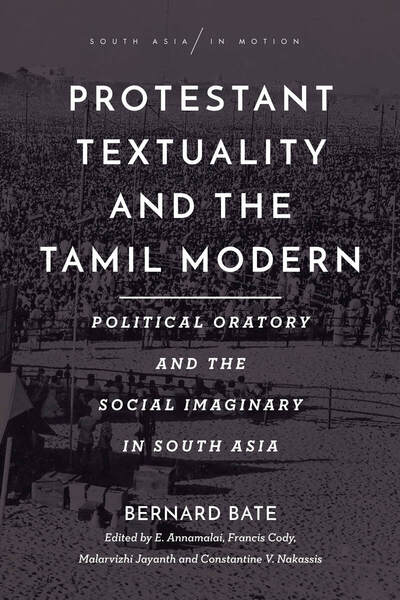 Throughout history, speech and storytelling have united communities and mobilized movements. Protestant Textuality and the Tamil Modern examines this phenomenon in Tamil-speaking South India over the last three centuries, charting the development of political oratory and its influence on society. Supplementing his narrative with thorough archival work, Bernard Bate begins with Protestant missionaries' introduction of the sermonic genre and takes the reader through its local vernacularization. What originally began as a format of religious speech became an essential political infrastructure used to galvanize support for new social imaginaries, from Indian independence to Tamil nationalism. Completed by a team of Bate's colleagues, this ethnography marries linguistic anthropology to performance studies and political history, illuminating new geographies of belonging in the modern era.

Bernard Bate was Associate Professor of Anthropology at Yale-NUS College. A linguistic anthropologist who specialized in the Tamil language, his first book is Tamil Oratory and the Dravidian Aesthetic (2009).

E. Annamalai is Visiting Professor of Tamil at the University of Chicago.

Francis Cody is Associate Professor in Anthropology and in the Asian Institute, both at the University of Toronto.

Malarvizhi Jayanth is a historian of colonial South Asia pursuing her doctorate at the University of Chicago.

Constantine V. Nakassis is Associate Professor of Anthropology and affiliated faculty in Cinema and Media Studies at the University of Chicago.

"A brilliant demonstration of how speech genres can shape history, Protestant Textuality and the Tamil Modern traces the emergence of political oratory in South India, calling new publics into being and driving the rise of the Tamil modern. Bernard Bate's new book is a foundational, richly documented contribution to the study of comparative modernities, South Asian history, and political anthropology, securing his legacy as a worthy heir to Weber and Durkheim in the elucidation of modern social and political formations."

"This book—assembled by a remarkable group of his colleagues—is a tribute to Bate's monumental effort to place Tamil oratory in its civilizational, genealogical, and comparative context. Bate's argument about Protestant sermonizing as the key to the birth of the modern political subject in Tamil country is a major breakthrough in the study of the linkage of modern politics to poetics and religious oratory."