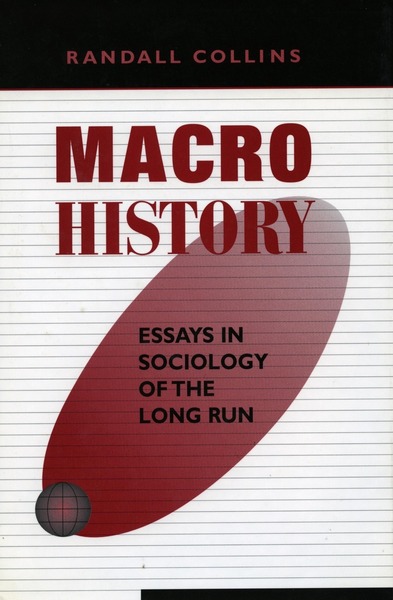 Macrohistory
Essays in Sociology of the Long Run
Randall Collins

This book explores the accomplishments of the golden age of “macrohistory,” the sociologically informed analysis of long-term patterns of political, economic, and social change that has reached new heights of sophistication in the last decades of the twentieth century.

It describes the scholarly revolution that has taken place in the Marxian-inspired theory of revolutions, the shift to a state-breakdown model in which revolutions, rather than bubbling up from discontent below, start at the top in the fiscal strains of the state. The author links revolutions to military-centered transformations of the state, and reviews how he used this theory in the early 1980s to predict the breakdown of the Soviet empire.

He goes on to show the implications of viewing states and societies from the outside in, including the geopolitical patterns that affect the legitimacy of dominant ethnic groups and thus determine the direction of ethnic assimilation or fragmentation. Another application is the author’s new theory of democratization, which asserts that democracy depends not merely on a widening of the franchise but on a geopolitical pattern favoring federated structures of collegially shared power.

Using this new theoretical tool, the author argues that Anglophone scholars have polemically misinterpreted German history, and that the roots of the Holocaust cannot be determined by German-bashing but must be attributed to processes that affect all of us. Other essays generalize about the historical dynamics and transformations of markets. Going beyond Weber’s Eurocentric model, the author proposes a more general theory that explains the origins of capitalism in Japan on an independent but parallel path.

"Given that a short review cannot do justice to the complexity and richness of this compelling book, it must suffice to say that its most innovative and exciting aspect is Collins' discussion of the still under-theorized dimension of democratic modernity. This is especially the case when his discussion is combined with his reflections on ethnic change."

—Journal of the History of Behavioral Sciences