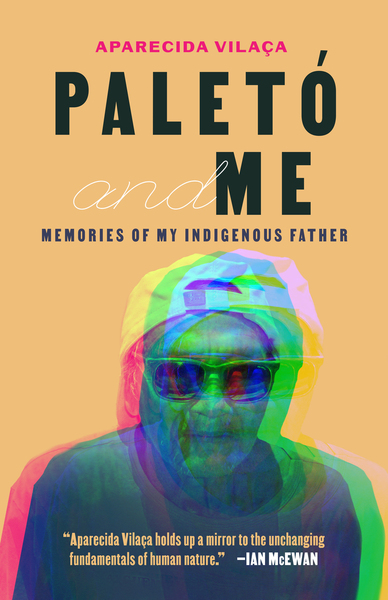 Paletó and Me
Memories of My Indigenous Father
Aparecida Vilaça

Winner of the prestigious Casa de las Américas Prize, this work spins a heartfelt story of an improbable relationship between an anthropologist and her charismatic Indigenous father.

When Aparecida Vilaça first traveled down the remote Negro River in Amazonia, she expected to come back with notebooks and tapes full of observations about the Indigenous Wari' people—but not with a new father. In Paletó and Me, Vilaça shares her life with her adoptive Wari' family, and the profound personal transformations involved in becoming kin.

Paletó—unfailingly charming, always prepared with a joke—shines with life in Vilaça's account of their unusual father-daughter relationship. Paletó was many things: he was a survivor, who lived through the arrival of violent invaders and diseases. He was a leader, who taught through laughter and care, spoke softly, yet was always ready to jump into the unknown. He could shift seamlessly between the roles of the observer and the observed, and in his visits to Rio de Janeiro, deconstructs urban social conventions with ease and wit.

Begun the day after Paletó's death at the age of 85, Paletó and Me is a celebration of life, weaving together the author's own memories of learning the lifeways of Indigenous Amazonia with her father's testimony to Wari' persistence in the face of colonization. Speaking from the heart as both anthropologist and daughter, Vilaça offers an intimate look at Indigenous lives in Brazil over nearly a century.

Aparecida Vilaça is Professor of Social Anthropology at the National Museum, Federal University of Rio de Janeiro. She is the author of Strange Enemies: Indigenous Agency and Scenes of Encounters in Amazonia and Praying and Preying: Christianity in Indigenous Amazonia. She has come and gone among the Wari' since 1986.

"In this extraordinary account, the rich experiences of a seasoned social anthropologist are superbly sustained by novelistic insights. Aparecida Vilaça takes us on a journey into a profoundly alien culture by entering the mind of one man, Paletó. His life spanned, it seemed, an entire history of human civilization. From an upbringing and early adulthood in an uncontacted tribe in the Amazon forest to the explosive, savage intrusions of modernity, his outlook remained deeply humane. Through him, Vilaça holds up a mirror to the unchanging fundamentals of human nature."

"Simple and profound, this book is a testament to an ethical, moral, and political commitment to the colonized peoples of America."

"When I read Paletó and Me, I had a wonderful revelation. Our ancestors, with wisdom and magic, foresaw an irrepressible capacity of people to affect worlds and to make families across cultures. And I gained a 'relative' in the talented writer Aparecida Vilaça, whose anthropology is made of affects between worlds."

—Ailton Krenak, author of Ideas to Postpone the End of the World

"The wonderful draw of Paletó and Me is the courage of one woman immersing herself in another culture and 'making relatives.' Through her acute observations, Aparecida Vilaça conveys a way of being to any reader who may not know how one indigenous community continues to exist."

—Linda Hogan, author of The Radiant Lives of Animals

"Paletó and Aparecida's unlikely, potent kinship is narrated unforgettably in this book, without the narrator glossing over any of the violence of colonialism across which it happened. Kinship is always a surprise, never to be taken for granted. Paletó and Me shows how such a surprise continues to matter."

—Donna Haraway, author of Staying with the Trouble: Making Kin in the Chthulucene

"In this fascinating account, Aparecida Vilaça at times effaces herself—concealed by her friend's lively voice—and at times reemerges in the luminous form of her singular and personal writing. Far from being a conventional anthropological text, Paletó and Me depicts the inebriating journey between identities that reveal themselves to be both ancient and fleeting."

"Written in a conversational tone and guided by memories, Paletó and Me is inspired by questions rather than conclusions and completely forsakes ideology, rendering Aparecida Vilaça's memories into a delightful story."

"Vilaa manages to captivate us by letting her and Paletó's memories speak for themselves. Beautifully written, Paletó and me is not only a joy to read, but should become the model for anthropologists wishing to express the personal aspects of their fieldwork."

—Niklas Hartmann, Journal of the Anthropological Society of Oxford

Mourning Kin After the End of Cannibalism