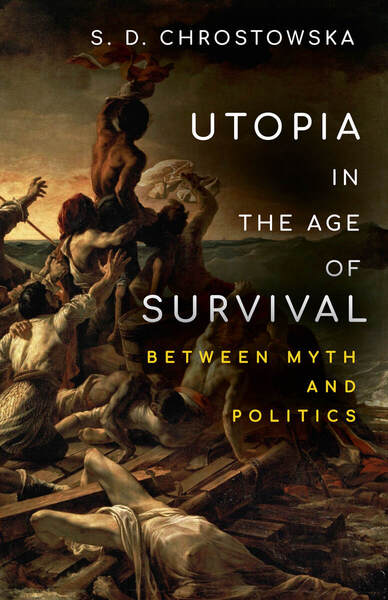 Utopia in the Age of Survival
Between Myth and Politics
S. D. Chrostowska

A pathbreaking exploration of the fate of utopia in our troubled times, this book shows how the historically intertwined endeavors of utopia and critique might be leveraged in response to humanity's looming existential challenges.

Utopia in the Age of Survival makes the case that critical social theory needs to reinstate utopia as a speculative myth. At the same time the left must reassume utopia as an action-guiding hypothesis—that is, as something still possible. S. D. Chrostowska looks to the vibrant, visionary mid-century resurgence of embodied utopian longings and projections in Surrealism, the Situationist International, and critical theorists writing in their wake, reconstructing utopia's link to survival through to the earliest, most radical phase of the French environmental movement. Survival emerges as the organizing concept for a variety of democratic political forms that center the corporeality of desire in social movements contesting the expanding management of life by state institutions across the globe.

Vigilant and timely, balancing fine-tuned analysis with broad historical overview to map the utopian impulse across contemporary cultural and political life, Chrostowska issues an urgent report on the vitality of utopia.

S.D. Chrostowska is Professor of Humanities and Social & Political Thought at York University. She is the author of Literature on Trial: The Emergence of Critical Discourse in Germany, Poland, and Russia, 1700-1800 (2012), among other titles.

"This is an important book and an original and stimulating contribution to the political theory of utopias. Revisiting the utopian tradition from a critical theory perspective, Chrostowska argues that utopia is a hypothesis and an impetus for action rather than a blueprint ofthe future. It is neither an abstract ideal nor a local miniature but a universal politics ofdesire at a moment in history when human survival is at stake. There are many books on utopia, of course, but this one has a singular and original approach, which has no equivalent."

"In this elegant and bold ode to utopian thinking in the shadow of climate change and pandemics, Chrostowska masterfully argues that critique and utopia should be inextricably linked as a double helix in the theoretical DNA of a global left politics. Laying bare both the seductions and the traps of utopianism, she makes the compelling case that a utopianism that begins from the body, its desires and imagination, is absolutely crucial for an ethical and political life beyond survival. Erudite and filled with brilliant insight, this forceful book is a candid invitation for the kind of thinking beyond that never leaves criticism behind."

—Banu Bargu, author of Starve and Immolate: The Politics of Human Weapons

Is There a Place for Utopia?: A wheel that needs reinventing.