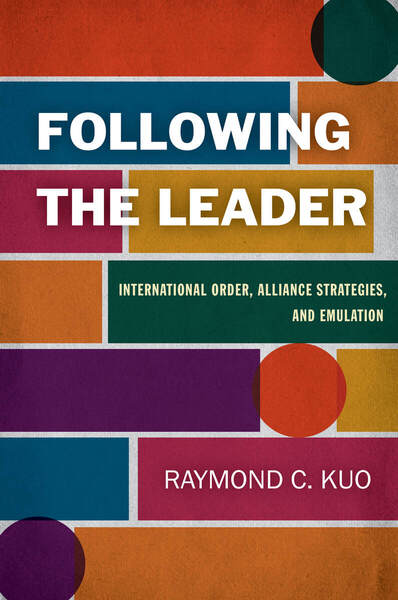 Nations have powerful reasons to get their military alliances right. When security pacts go well, they underpin regional and global order; when they fail, they spread wars across continents as states are dragged into conflict. We would, therefore, expect states to carefully tailor their military partnerships to specific conditions. This expectation, Raymond C. Kuo argues, is wrong.

Following the Leader argues that most countries ignore their individual security interests in military pacts, instead converging on a single, dominant alliance strategy. The book introduces a new social theory of strategic diffusion and emulation, using case studies and advanced statistical analysis of alliances from 1815 to 2003. In the wake of each major war that shatters the international system, a new hegemon creates a core military partnership to target its greatest enemy. Secondary and peripheral countries rush to emulate this alliance, illustrating their credibility and prestige by mimicking the dominant form.

Be it the NATO model that seems so commonsense today, or the realpolitik that reigned in Europe of the late nineteenth century, a lone alliance strategy has defined broad swaths of diplomatic history. It is not states' own security interests driving this phenomenon, Kuo shows, but their jockeying for status in a world periodically remade by great powers.

"Following the Leader is an exceptionally timely contribution to the scholarship on international order, and one with important policy observations for today. This is top notch scholarship: the research and analysis are deep and incisive, and conveyed with clear, crisp prose."

—Timothy Andrews Sayle, University of Toronto, author of Enduring Alliance: A History of NATO and the Postwar Global Order

"In Following the Leader, Raymond Kuo implodes the conventional wisdom that states design their alliances to meet their strategic needs. Drawing from cutting-edge network and status theories, Kuo builds a compelling argument about states' social position and alliance strategies, which he tests in cases that span geographical regions and centuries."

"In this groundbreaking book, Raymond Kuo probes the deep logic and diverse patterns of alliance cooperation. Theoretically innovative, methodologically sophisticated, and rich in historical case studies, Following the Leader illuminates the complex and shifting ways in which states seek security and build alliances."