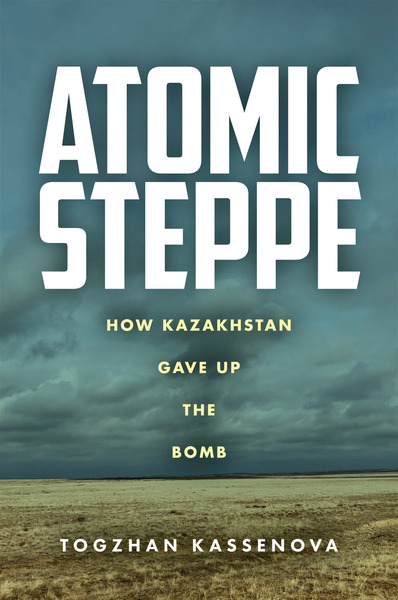 Atomic Steppe
How Kazakhstan Gave Up the Bomb
Togzhan Kassenova

Atomic Steppe tells the untold true story of how the obscure country of Kazakhstan said no to the most powerful weapons in human history. With the fall of the Soviet Union, the marginalized Central Asian republic suddenly found itself with the world's fourth largest nuclear arsenal on its territory. Would it give up these fire-ready weapons—or try to become a Central Asian North Korea?

This book takes us inside Kazakhstan's extraordinary and little-known nuclear history from the Soviet period to the present. For Soviet officials, Kazakhstan's steppe was not an ecological marvel or beloved homeland, but an empty patch of dirt ideal for nuclear testing. Two-headed lambs were just the beginning of the resulting public health disaster for Kazakhstan—compounded, when the Soviet Union collapsed, by the daunting burden of becoming an overnight nuclear power.

Equipped with intimate personal perspective and untapped archival resources, Togzhan Kassenova introduces us to the engineers turned diplomats, villagers turned activists, and scientists turned pacifists who worked toward disarmament. With thousands of nuclear weapons still present around the world, the story of how Kazakhs gave up their nuclear inheritance holds urgent lessons for global security.

Togzhan Kassenova is senior fellow at the University at Albany, SUNY and a nonresident fellow of the Carnegie Endowment for International Peace.

"Atomic Steppe is the untold story of how Kazakhstan rid itself of nuclear weapons—a remarkable accomplishment for a new nation. Togzhan Kassenova documents this momentous tale with depth, rigor, and skill. A revelatory, authoritative account of how the nuclear arms race went backwards, for once, making the world safer."

—David E. Hoffman, author of The Dead Hand: The Untold Story of the Cold War Arms Race and Its Dangerous Legacy

"Togzhan Kassenova's moving Atomic Steppe offers one of the first complete English-language accounts of the devastating but little-known nuclear history of Kazakhstan. The author successfully blends meticulous research with her own family's personal experience."

—Sarah Cameron, author of The Hungry Steppe: Famine, Violence, and the Making of Soviet Kazakhstan

"In this wonderful book, Togzhan Kassenova provides an intimate account of Kazakhstan's nuclear history and an acute analysis of how it handled its post-Soviet nuclear inheritance. Atomic Steppe is a deeply researched and profoundly affecting book, which everyone concerned about the nuclear state of the world should read."

"With the sweeping and inspiring Atomic Steppe, Togzhan Kassenova has unearthed insights new even to those of us who had front-row seats to Kazakhstan's nuclear saga, telling a story both accurate and humane. Anyone interested in Eurasia or in health, environmental, and nuclear challenges should read this engrossing book."

"Togzhan Kassenova's remarkable Atomic Steppe offers both a scholarly and a deeply personal view of the damage that more than seventy years of nuclear testing have caused to the soil and the people of this region."

"The beauty and magic of this brutalized landscape cannot be erased. Togzhan's book introduces us to the indomitable strength of itspeople, including those victimized by nuclear testing. They and we are in her debt."

"Togzhan Kassenova's review of 70 years of Kazakhstan's history in Atomic Steppe is the definitive study of that country's nuclear inheritance and its associated internal politics and international diplomacy."

"Kassenova's masterpiece not only outlines the importance of patience, empathy and deftness in diplomacy, but also helps to recalculate the costs of nuclearization. By compellingly telling Kazakhstan's nuclear story, the author warns against ignoring the most important stakeholders of the nuclear non-proliferation regime: people."

"Atomic Steppe is a book of two halves that have been fused together to create a perfect whole. The first half describes the legacy of Kazakhstan's Soviet nuclear weapon tests. Conversely, the second part explores Kazakhstan's subsequent independence and the rugged pathway towards its emergence as a nuclear-free state in the early 1990s It is completely unique, an absolute must read, and it will become an atomic classic of our time."

"Atomic Steppe has much to inspire in future scholarship. By decentering the narrative from the United States and USSR and focusing on the Kazakh perspective, Kassenova brings attention to stories that have been overshadowed or ignored. In detailing the diplomatic interactions between the US and Kazakhstan, and the rise of the anti-nuclear movement in Kazakhstan, Kassenova clearly demonstrates that the Kazakhs were active agents, rather than passive bystanders, in shaping their future."

"Atomic Steppe is a new classic in the field that contains essential lessons for future efforts to rid the world of nuclear weapons and address the human toll of nuclear testing."

"Atomic Steppe is a well-informed, well-written, and necessary read for anyone eager to learn about the devastating effects of nuclear weapons, a topic that has become even more relevant now that Putin has invaded Ukraine and has threatened to use nuclear weapons in the region."

"Using Kazakh and American archival sources, Kassenova skillfully analyzes the intricacies of Kazakhstan's transformation into a nonnuclear-weapon state after inheriting 104 nuclear missiles when the Soviet Union collapsed... this excellent book makes an important contribution to the literature on nuclear arms control and disarmament. Highly recommended."

"This book would make anyone closer to understanding why nuclear world is not far-fetched and overtheorized, because Atomic Steppe is not only about politics or even a nuclear bomb, it is, most importantly, about people."

—Pirnavskaia Kseniia, The Korean Journal for the History of Science

"The story told through a decisively 'Kazakh perspective', is a welcome addition shining light on a hitherto underexplored dimension and its impact on the global nuclear order."

—Robin Möser, Connections. A Journal for Historians and Area Specialists

Vienna Center for Disarmament and Non-Proliferation
Book Talk. Atomic Steppe: How Kazakhstan Gave Up the Bomb by Togzhan Kassenova

The Harriman Institute at Columbia University
How Did Kazakhstan Give Up the Bomb?

The Diplomat
[ More links ]
More in Security Studies—Proliferation and WMD