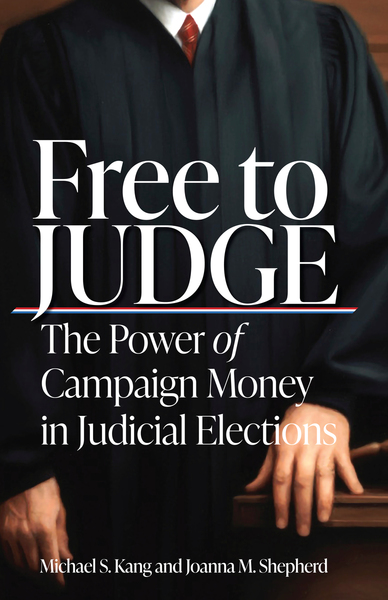 The idea that wealthy people use their money to influence things, including politics, law, and media will surprise very few people. However, as Michael S. Kang and Joanna Shepherd argue in this readable and rich study of the state judiciary, the effect of money on judicial outcomes should disturb and anger everyone. In the current system that elects state judges, the rich and powerful can spend money to elect and re-elect judges who decide cases the way they want. Free to Judge is about how and why money increasingly affects the dispensation of justice in our legal system, and what can be done to stop it.

One of the barriers to action in the past has been an inability to prove that campaign donations influence state judicial decision-making. In this book, Kang and Shepherd answer that challenge for the first time, with a rigorous empirical study of campaign finance and judicial decision-making data. Pairing this with interviews of past and present judges, they create a compelling and persuasive account of people like Marsha Ternus, the first Iowa state supreme court justice to be voted out of office after an intense her and her decision in a same-sex marriage case. The threat of such an outcome, and the desire to win reelection, results in judges demonstrably leaning towards the interests and preferences of their campaign donors across all cases.

Free to Judge is thus able to identify the pieces of our current system that invite bias, such as judicial reelection, and what reforms should focus on. This thoughtful and compellingly written book will be required reading for anybody who cares about creating a more just legal system.

Michael S. Kang is the Class of 1940 Professor at Northwestern University's Pritzker School of Law. He recently served on the Presidential Commission on the Supreme Court and was the co-editor of Race, Reform, and Regulation of the Electoral Process (2011). He has also published extensively in law reviews including Yale Law Journal and Stanford Law Review.

Joanna M. Shepherd is Vice Dean and Thomas Simmons Professor of Law at Emory University School of Law. She is the author of two previous books and her work has appeared in dozens of legal and academic publications including The Journal of Law & Economics, Stanford Law Review, and Michigan Law Review. Her empirical research has been cited by numerous courts, including twice by the U.S. Supreme Court.