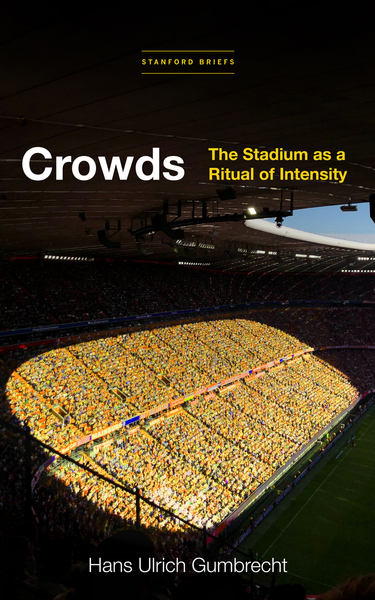 Crowds
The Stadium as a Ritual of Intensity
Hans Ulrich Gumbrecht

Anyone who has ever experienced a sporting event in a large stadium knows the energy that emanates from stands full of fans cheering on their teams. Although "the masses" have long held a thoroughly bad reputation in politics and culture, literary critic and avid sports fan Hans Ulrich Gumbrecht finds powerful, as yet unexplored reasons to sing the praises of crowds. Drawing on his experiences as a spectator in the stadiums of South America, Germany, and the US, Gumbrecht presents the stadium as "a ritual of intensity," thereby offering a different lens through which we might capture and even appreciate the dynamic of the masses.

Pairing philosophical rigor with the enthusiasm of a true fan, Gumbrecht writes from the inside and suggests that being part of a crowd opens us up to an experience beyond ourselves.

"A wild, entertaining ride from Maradona to Nietzsche, from the Russian Revolution to the Boston Tea Party, from Jesus to Karl Marx."

"[Gumbrecht's] new book takes an empathetic look at the elation of fans like me, on nights like the one I experienced eight years ago [at the Pittsurgh Pirates playoff game against the Cincinnati Reds]. In a synoptic history, Gumbrecht explores both fear of crowds, of their violence and unreason—going back, via Freud and José Ortega y Gasset, to Gustave Le Bon's Psychologie des Foules in 1895—and implausible hopes for their political efficacy, from the French Revolution to the fall of the Berlin Wall and the Arab Spring."